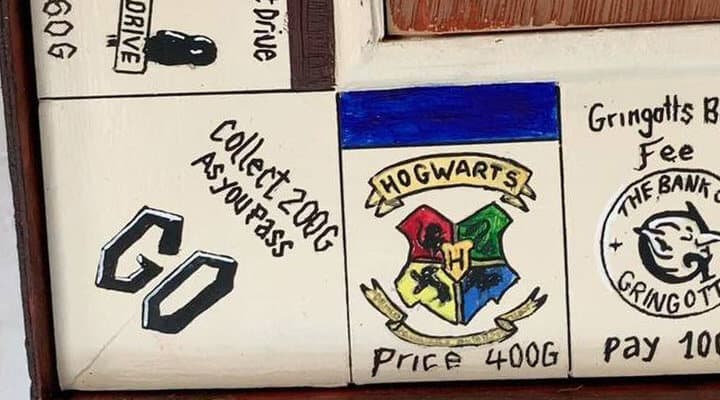 During these less enchanting times of stay-at-home orders and social distancing, it’s easy to get lost in current health crisis. However, this man decided to get lost in fantasy instead and create his very own Harry Potter-themed Monopoly board game for him and his girlfriend and the result is magical.

This board game, suited for only the finest wizards, comes from primary school teacher Alex who wanted to make the game specifically for his Harry Potter obsessed girlfriend Chloe.

“Harry Potter has just been a series I’ve always loved. I read each of the books when they first came out and since the films came out I’ve also watched them a ridiculous amount of times too,” said Chloe when explaining her love affair with the famed book and movie series to Lad Bible.

Even though Alex created the Harry Potter board game for his girlfriend, she revealed it wasn’t all just for her. “Alex does enjoy it though. As much as he has made this game for me, it’s definitely for him too,” said Chloe.

Chloe says the idea for the game came about when the two began playing Monopoly again and discussed how a Harry Potter Monopoly would be a good idea as there would be so many choices for places to put on the game board.

“We both had a look online and couldn’t seem to find an official one anywhere to get in the UK. The only ones we found were other home-made versions,” said Chloe.

And as the Easter holiday was approaching, Alex considered the fact that they wouldn’t be able to go anywhere due to the lockdown. Thus, sparking the idea to create this game.

“As I wasn’t able to go out due to the lockdown I had to be resourceful and use what I had lying around, some pine skirting board and a couple of small sheets of plywood,” said Alex.

Alex said when designing the game, he tried to make its parts before buying them. Additionally, he revealed this wasn’t his first go at DIY as he had worked on other projects in the past, including converting his own camper van.

This wizarding game features all the bits of magic you’d find on a Monopoly board — only with a Harry Potter twist. Most of which, was designed, thought out, and assembled by Alex himself–including the money and the comments on the Community Chest and Chance cards.

The only parts Alex purchased for the game were the silver Harry Potter-themed figures used for game pieces, which he ordered online. The game’s wood dice were created with help from Alex’s brother Andrew.

As we all know–with any board game there can only be one winner and according to Chloe, she seems to have been the one to catch the golden snitch the first go around with the game. “I won. We are both very competitive so at the start of the game I didn’t know if it was going to end well or in tears,” said Chloe.

Would you purchase this Harry Potter-themed Monopoly game? Let us know in the comments!