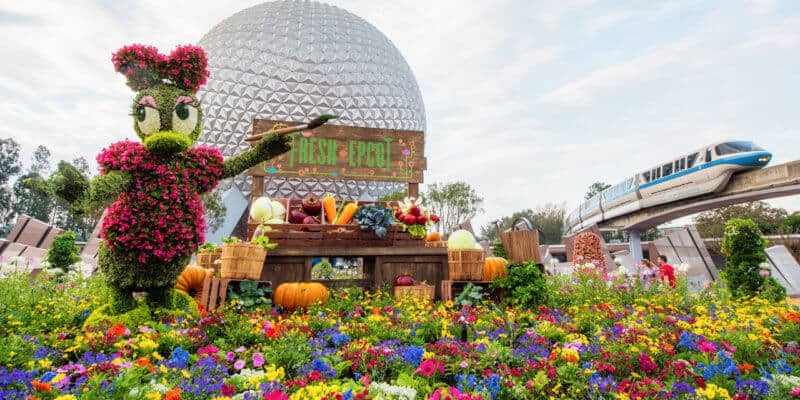 Central Florida began reopening businesses earlier this month and things appear to be ramping up quickly! This week has been a busy one with the reopening of the first U.S. Disney Parks property reopening its doors, Disney Springs, and Universal Orlando announcing their proposed reopening date for June 5th!

While the Walt Disney World Resort has yet to make official an announcement, it is possible they will be submitting plans in an upcoming Reopen Florida Task Force meeting. Even as soon as next week!

There have been some sightings of forward movement at the parks, albeit without any confirmation as to what is officially taking place. Two Monorails were spotted running by a passerby, and in these recent aerial photos of EPCOT, we can see that the EPCOT International Flower & Garden Festival decorations have been removed.

The EPCOT International Flower & Garden Festival was scheduled to run from March 4- June 1st. Fans were hopeful to experience the festival if the theme parks reopened before June 1st. However, these pictures confirm the festival will unfortunately not resume this year.

Aerial look at where the butterfly tent was for EPCOT Flower and Garden Festival. Note also the empty circular flower beds inside the monorail loop, and the empty pond.

Aerial look at where the butterfly tent was for EPCOT Flower and Garden Festival. Note also the empty circular flower beds inside the monorail loop, and the empty pond. pic.twitter.com/Y4h8SV076S

We’ll surely miss getting to experience the garden rocks concert series, walking through the World Showcase seeing all the gorgeous topiaries, the scavenger hunts, super cute Orange Bird merch, and all the magic of this festival this year. However we are hopeful we’ll be able to enjoy EPCOT again this fall for the Food & Wine Festival. Sprinkling some faith, dust, and pixie dust!

Disney has confirmed they are not taking any new reservations before July and they recently sent an email encouraging guests to reschedule their booked vacations booked through mid-June. This is not necessarily an indicator the parks won’t open sooner, however, only time will tell.

We will continue sharing the progress of the theme parks reopening as we hear the official word from Disney. So, be sure to keep checking back with us here at Inside the Magic so you can be among the first to learn when the Walt Disney World Resort, EPCOT, Magic Kingdom, Disney’s Animal Kingdom, Disney’s Hollywood Studios, and the rest of the Disney Parks reopen. See ya real soon!