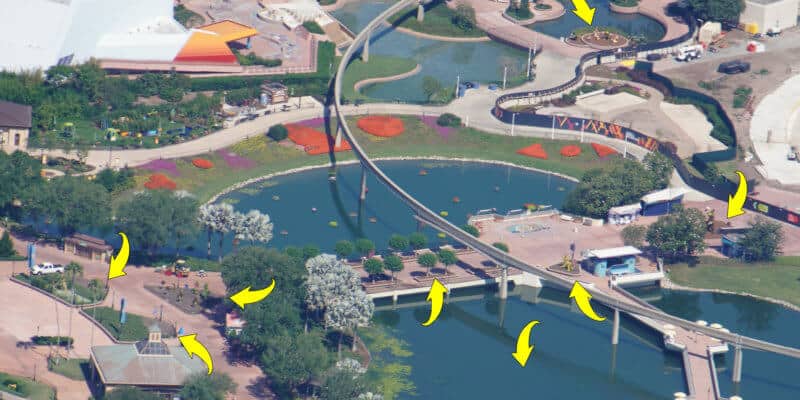 As Walt Disney World theme parks continue in their extended closures, new aerial images of EPCOT reveal the Flower and Garden Festival flower beds have been removed, even though they were originally set to be present at the park through June 1.

The new images come from Twitter user @Bioreconstruct, who uses arrows in the following images to point out areas where the beds had existed prior to the theme park’s closure in mid-March. This is in addition to missing floating gardens as well, all reported to be removed as of May 4.

The EPCOT Flower and Garden Festival ended abruptly March 15 when Walt Disney World closed due to Covid-19. This aerial May 4 shows that flower beds have been cleared in many areas. Also some of the floating gardens. pic.twitter.com/HBMbkFBjv3

From this recent change, it seems the Epcot International Flower & Garden Festival might be coming to an end earlier this year on account of the park’s temporary closures.

As we recently reported, Walt Disney World has not only been canceling more vacations taking place in late May, but they’re also not accepting any new reservations beginning prior to June 1. From this development, it’s not crazy to assume the parks may not open prior this date. If so, the necessity of these flower beds, which were originally to be removed come June 1, makes sense.

Monorail view of an EPCOT floral mural on March 7, and aerial view of same section on May 4. The Flower and Garden Festival ended abruptly on March 15 when Walt Disney World closed due to Covid-19. pic.twitter.com/sVMYwCawzf

In the images above, @Bioreconstruct shows a before and after of a section of the park’s missing flower beds by Future World from March 7 to May 4. In the image, it can be seen that all that remains from the removal is the Mickey Mouse shaped flower beds in orange flowers.

Aerial photo May 4 showing the Butterfly House still standing in EPCOT. A new location this year, but an annual feature of the Flower and Garden Festival. Park is closed due to Covid-19. pic.twitter.com/Se4uHqqyDw

These beloved flower beds may be gone from the Disney Park. However, @Bioreconstruct also points out in his series of aerial image tweets that the Butterfly House, a fun happening that takes place during the annual event, still stands in its new location to this year’s event at the park.

All images featured in this article from Twitter user @Bioreconstruct, including the header image.

What are your thoughts on the early removal of the flower beds from the Epcot International Flower & Garden Festival? Let us know in the comments!