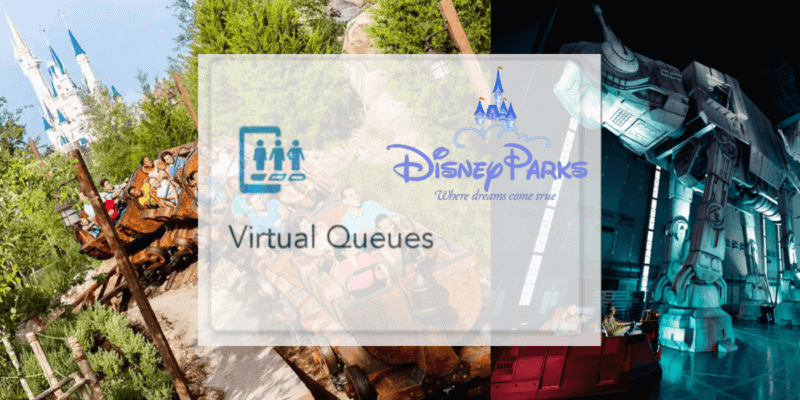 Earlier this year, Inside the Magic reported about the addition of a Virtual Queue menu option that had been popping up in the My Disney Experience and Disneyland mobile apps. The update was inconsistently showing up for guests and, aside from the boarding group system that was implemented at the time for Star Wars: Rise of the Resistance at Disney’s Hollywood Studios, no official announcement had been made regarding additional attractions having a virtual queue.

Recently, the Disney Parks Blog shared an announcement from Chief Medical Officer Dr. Pamela Hymel. In the article, Dr. Hymel talks about how, just like us, Disney is eager to enjoy the magic back at the Disney Parks, but health protocols and safety is their number one concern during this time.

In the Physical distancing and capacity measures bullet point in the article, there is a note about virtual queues at both Disney World and Disneyland. See below:

Physical distancing and capacity measures: As you can imagine, managing guest density in queues, restaurants, hotels, ride vehicles and other facilities throughout the park and across the resort is a major focus, as we implement physical distancing guidelines based on guidance from health authorities, such as the Centers for Disease Control and Prevention (CDC) and appropriate government agencies. This will likely include implementation of guest capacity measures to comply with state and federal guidelines. We’re also exploring ways to use technology to aid us in these efforts, like with our Play Disney Parks App and through virtual queues at Disneyland and Walt Disney World.

So, officially, Disney is “exploring” this as an option to aid in social distancing in attraction queues.

Fans Speak Out About Virtual Queues and Eliminating Standby

Some fans have taken to social media to support this idea of eliminating standby, making the twitter hashtag #eliminatestandby trend. Here are some of the comments on the thread :

His tweet, shared earlier this month, got the conversation going with 95 likes and 12 comments.

Twitter user @hastin shared some screenshots of when the virtual queue option was showing up in the Disney apps.

Wow so the new MDX/Disneyland app update totally changed the wording for Boarding Groups status, instead called “My Queues”. Seems like there might be plans to extend it.

Twitter user @ParkHopperDiego referenced the start of this trending hashtag/petition, per se.  In his tweet he shared:

Many years ago I followed

, and this man always had this idea of “Eliminating Standby” queues. I thought, “what kind of silly idea is that?” -Fast forward to 2020, the new Covid era of theme parks, where the concept of #EliminateStandby is now indeed, a reality.

Many years ago I followed @DrunkAtdisney , and this man always had this idea of “Eliminating Standby” queues. I thought, “what kind of silly idea is that?”
-Fast forward to 2020, the new Covid era of theme parks, where the concept of #EliminateStandby is now indeed, a reality. ? pic.twitter.com/JguqGbc6og

And of course, you have some folks that add humor to the conversation and we love it!

Disney has yet to confirm how they will handle attractions and guest capacity in general in their U.S. Disney Parks yet. We do know they are looking closely at what Shanghai is doing and hoping to follow their lead on the protocols that are successfully working.

What are your thoughts on eliminating standby from Disney’s attraction queues? Do you think this is a good idea? A necessity for social distancing at the parks? Let us know your thoughts in the comments!