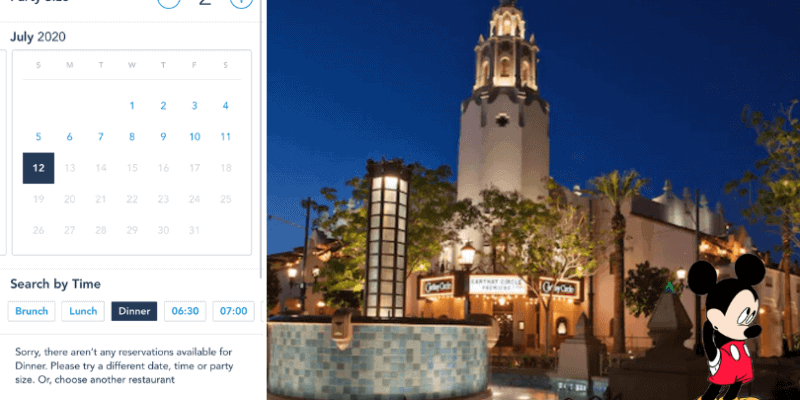 It appears that Disneyland fans are going to have to wait even longer to have their next dining experience. Reservations for all resort restaurants are now unavailable through July 12, 2020.

Disneyland Resort typically allows for dining reservations to be made 60 days in advance. However, the ability to make reservations for character breakfast at the Plaza Inn, tea at the Disneyland Hotel, dinner at Carthay Circle, or any other dining experience at any of the restaurants at Disneyland, Disney California Adventure, Downtown Disney, or any of the three resort hotels has been removed through the next 60 days.

Inside the Magic confirmed the news by attempting to make dining reservations of our own via the Disneyland app. Every day of the first half of July reads the following when we searched for a breakfast, brunch, lunch, and dinner reservation:

“Sorry, there aren’t any reservations available…Please try a different date, time, or party size. Or, choose another restaurant.”

This is the latest change made by Disneyland. Inside the Magic recently reported that the Southern California resort removed its operating hours for late June and quietly delayed the opening of the highly-anticipated new spa at Disney’s Grand Californian Resort and Spa, Tenaya Stone Spa. It was originally slated to be opened in Spring 2020. Guests also cannot book a hotel reservation for any date before July 1.

We want to remind our readers that the Disneyland Resort remains closed until further notice. No reopening date has been announced. Reservation availability, or lack thereof, should not be interpreted as an indication of a reopening date.

But Disneyland’s reopening could be contingent upon California’s Guidelines, and currently, California Governor Gavin Newsom still has the state in a “shelter in place” order while Florida’s Governor, Ron DeSantis, has further advanced his State’s recovery strategy, which has allowed for the imminent reopening of both Disney’s Disney Springs and Universal’s CityWalk. Disneyland’s own shopping and dining district, Downtown Disney, has yet to declare any reopening news.

In one way or another, Disney has released the recipes for some of its most iconic Disneyland menu items and we at Inside the Magic are more than happy to share them with you.

Which Disneyland restaurant are you missing the most? Let us know in the comments!