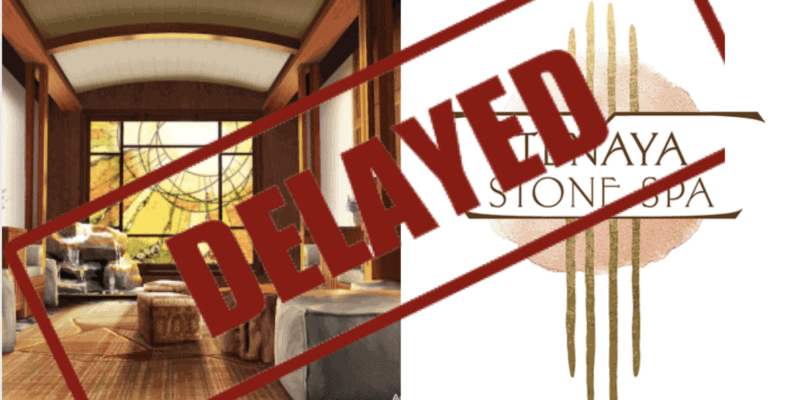 Last year, Disney Parks officials announced the upcoming opening of the Tenaya Stone Spa at Disney’s Grand Californian Hotel & Spa. The new spa, which will take the place of the Disney Resort’s Mandara Spa, is the first spa to ever be designed by Walt Disney Imagineering.

Originally, the facility was slated to open in Spring 2020. Now, however, the Disneyland Resort website has been quietly updated to say that Tenaya Stone Spa is “Coming Soon.”

The new Disney spa opening delay is certainly precipitated by the temporary Disney theme park closure. When Tenaya Stone Spa does open, it is certain to provide Disneyland Guests with an incredible, immersive experience that only Imagineers can provide.

Disney’s description of the brand new spa says Guests will able to “Indulge in head-to-toe pampering – unwind at an upscale spa that immerses you in elevated levels of mind-body bliss.”

The new facility will be a “full-service spa specializing in good-for-the soul experiences. Choose from an array of signature body treatments, facials, massages, and salon services – all performed within a serene setting sure to relax, recharge, and invigorate the senses.”

A price list for the new Disneyland spa has not yet been released.

What’s next for Disneyland?

The Disney Parks team has not yet officially announced reopening protocols for the Downtown Disney shopping and dining district or Disneyland Resort. At present, the Los Angeles metro area (where Anaheim is located) is following state guidelines regarding reopening.

The Disneyland website is currently accepting onsite hotel reservations for July 1 and later. This does not, however, indicate that Disneyland Park and Disney’s California Adventure will reopen to the public on that date.

The Walt Disney Company has been cancelling vacation reservations based on the ever-changing health concerns around the world. Since this is a fluid situation, we need to wait for official confirmation regarding any reopening dates.

With Tenaya Stone Spa at Disneyland’s Grand Californian Hotel delayed, when do you think Disneyland Resort will reopen for Guests? Share your thoughts in the comments!