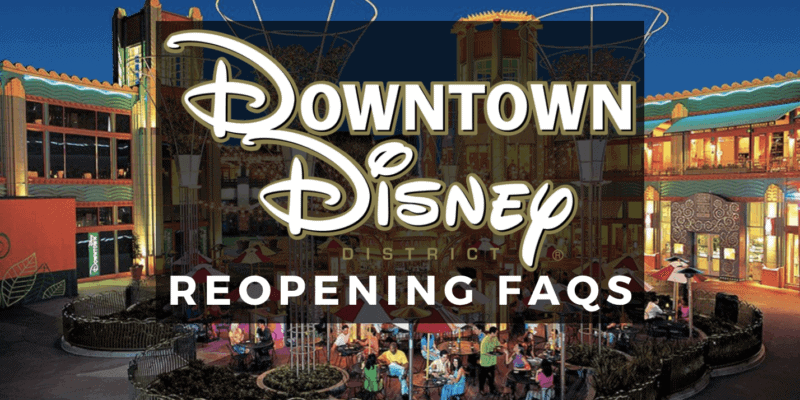 With the phased reopening of Walt Disney World’s shopping district, Disney Springs, beginning on May 20, it’s only a matter of time before the Disney Parks team announces when Disneyland Resort’s Downtown Disney district will start its reopening process.

The governors and legislatures in Florida and California have launched very different reopening plans for their states. Where Florida is allowing most businesses to reopen their doors (with new health and safety regulations), California has a stringent reopening plan that just began on Friday, May 8.

Here, you’ll find the answers you need about when Downtown Disney in Anaheim could be reopening to the public.

What is open in California?

On May 8, select retailers offering curbside pickup and delivery were allowed to reopen for those services only. Inside shopping and browsing are still prohibited in California.

The types of standalone retailers that were allowed to start providing curbside and delivery options include clothing boutiques, home decor shops, bookstores and music stores, and florists.

What is not open in California?

Currently, San Francisco and the Bay Area are still under a stay-at-home order. The mayor of the hard-hit region has stated that the San Francisco metro may begin reopening on May 18.

Orange County, where Los Angeles and Anaheim are located, has opted to follow state guidelines regarding reopening. This means that Downtown Disney’s stores and restaurants could open to the public sooner rather than later.

What’s next for California and Downtown Disney?

Governor Newsom is expected to make an announcement regarding dine-in services on May 12. This could give us a good idea of when restaurants at Downtown Disney will be able to start serving patrons again.

Once the state of California begins Phase 3 of its reopening plan, facilities like hair and nail salons, movie theaters, and sporting events without live audiences will be able to reopen.

“We just want to make sure we have a protocol in place to secure customer safety, employee safety and allow the businesses to thrive in a way that is sustainable,” he continued.

Once California starts Phase 3 of its phased plan, the reopening of Downtown Disney stores, restaurants, bars, and other experiences, including The VOID, is likely to be imminent.

How will Disney Springs play a role?

While the launch of Phase 3 should have a major impact on the establishments at Disneyland theme park‘s Downtown Disney district, it is also likely that Disney Park executives will examine the success of the Disney Springs reopening while making decisions about when to allow Disney Cast Members and other retail and restaurant workers to return to their jobs.

It is also likely that park officials will expect all employees to go through additional safety training and wear appropriate face coverings during their shifts.

Operating hours may be impacted for a time while things normalize in California. This will also allow for increased cleaning procedures to take place after hours.

Guests should plan to practice social distancing and take other necessary precautions for the time being.

Remember, the Walt Disney Company has yet to make any official announcement about the Disneyland shopping area, so stay tuned to Inside the Magic for news as we receive it.

What do you think the plan for Downtown Disney reopening should be? Tell us what you want to do when you return to Disneyland in the comments!