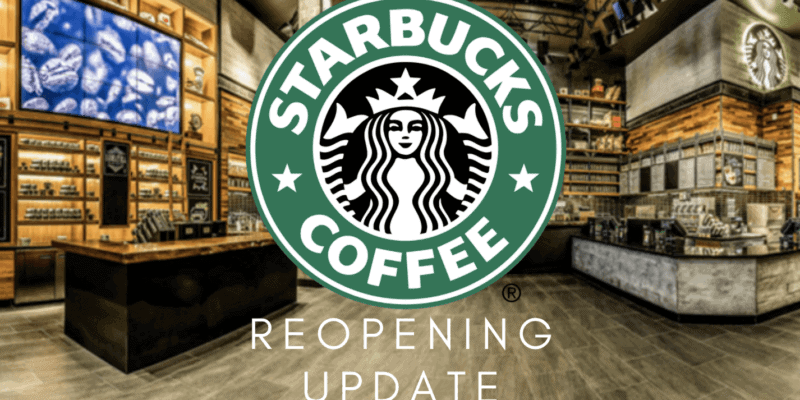 The reopening of the Starbucks locations at Disney World’s Disney Springs and Disneyland’s Downtown Disney district is highly anticipated by Disney Parks Guests and local residents alike. Many Americans struggle to start each day without a Starbucks fix and the famous coffee shops even serve as everyday workspaces and meeting locations for many people.

If you’ve been feeling lost without Disney’s Starbucks locations, you’ll probably be able to start buying your favorite lattes and Frappuccinos again sooner rather than later.

Although the Seattle-based Starbucks Coffee Company has not yet made an official announcement regarding their Disney Springs and Downtown Disney reopening dates, all of the coffee giant’s actions and statements so far indicate that they will open their Disney shopping district establishments as soon as possible.

Last week, the Starbucks Instagram account shared two reopening updates. The first graphic read simply, “See you soon,” above a drawing of the iconic Starbucks coffee cup. The caption indicated that Starbucks was working hard to open more locations across the United States.

We're working on welcoming you back to more locations. ? To see if your neighborhood store is open, check the Starbucks App.

Coffee keeps us connected. ?☕ Browse your favorites, pay ahead and pick up your order at the door, all through the Starbucks App for a contactless coffee run. To download, visit the link in our bio.

A May 5 Washington Post article about the coffee company’s store reopening protocols stated that “Starbucks plans to reopen 85 percent of its U.S. coffee shops by the end of this week, with an emphasis on mobile ordering, contactless pickup, and cashless payments.”

Approximately 20 million people in the United States already use the official Starbucks App, so moving toward mobile purchasing and payment shouldn’t be a stretch for Starbucks visitors.

It is likely that the two Disney Springs Starbucks locations will be among those reopening in the near future. Disney Springs will begin its phased reopening on May 20, with Disney-owned establishments opening to Disney Park Guests again after next weekend.

Additionally, the West End Disney Springs Starbucks recently filed a construction permit for a remodel. This lends further credence to the idea that the coffee shop is preparing to start serving beverages again in the near future.

It is worth noting that the Starbucks locations in each Disney theme park, such as the Main Street, U.S.A. location in the Magic Kingdom, and the EPCOT Starbucks location, will not reopen until Disney announces reopening dates for Walt Disney World Resort and Disneyland Resort.

Are you looking forward to the Disney Parks Starbucks reopening? What coffee drink are you going to order first?

Comments Off on When Will Disney Springs & Downtown Disney Starbucks Reopen? All We Know So Far!