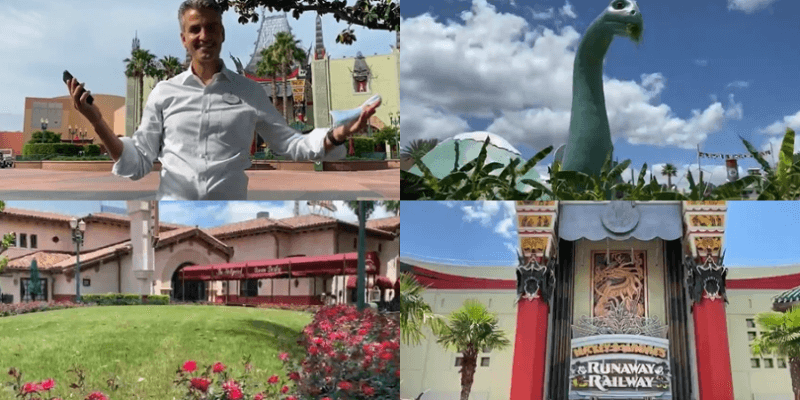 To celebrate the 31st anniversary of Disney’s Hollywood Studios, Walt Disney World Resort President Josh D’Amaro visited the theme park and made the decision to turn on the background music (even though no guests were around to hear it).

“Hey everyone! We are here at the beautiful Disney’s Hollywood Studios. It’s a gorgeous day out here,” D’Amaro says in the video he shared to his Instagram account. “I gotta say, I really miss you all. I hope everyone’s staying safe.”

The WDW president shares that guests and questions have been asking him questions about the theme parks, specifically whether or not Disney still has the background music playing throughout each of the lands and areas in the Disney Parks.

“You know, I’ve been getting a lot of questions lately about what it sounds like in the parks. Specifically, is the music on? Well, the answer is, as you can hear, no, the music is not on. It sounds beautiful in here: you hear birds chirping, you can hear a Cast Member talking every once in a while. But it does feel very different in here.”

D’Amaro continued, “So today, though, is a very special day. It’s Disney’s Hollywood Studios’s birthday. And so we figured maybe just for a short moment we could turn the music on and then turn it right back off, just so you could hear what it sounds like to have that old music back on.”

D’Amaro then introduced David from Disney’s Engineering Services, who had phoned in for the video.  David agreed to flip on the music so that fans can hear the beloved soundtrack to Disney World’s third theme park on its birthday.

Soon after the music starts, the video cuts to a compilation of short scenes from the park, so all of us Disney fans can see the beauty of Hollywood Studios and take in the atmosphere from the comfort of our own homes.

Join me as we make some magic to recognize the birthday of Disney’s Hollywood Studios today. #WaltDisneyWorld #DisneysHollywoodStudios #DisneyMagicMoments #DisneyCastLife #Magichasaname #StayStrong

“I’m looking forward to a time when I can hear this music with all of you,” D’Amaro said at the end of the video. And for all of us who love Disney Parks so much, that couldn’t be more true.

We can’t be in any of the Disney Parks today, even though so many of us wish we could. But we are thankful that Disney is keeping the parks closed for the safety and well-being of Guests, Cast Members, and employees, and we continue to keep everyone affected by the current pandemic (even those whose vacations have been canceled) in our thoughts at this time.

What’s your favorite Disney theme park? If you’re looking for Disney Parks music from around the world, check out this post!