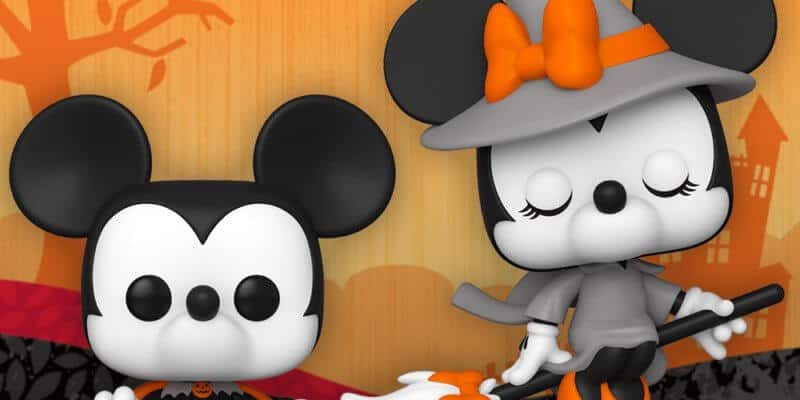 Earlier today we shared details of a new collection of Halloween Minion POP figures who are dressed up as some of Universal’s classic monsters.

Well, it would seem that now Disney wants a slice of the action with two brand-new figures featuring the main mice Mickey Mouse and Minnie Mouse. Let’s take a look at these awesome new collectibles in a bit more detail.

Mickey is doing his best vampire impression with this one. We love the detail on this figure with the matching orange shoes and cape and bat/pumpkin accessory.

Here he is in his coffin/box:

How is Minnie Mouse as a witch still cute? She pulls off  the look with a grey and orange hat, orange shoes, and a broom with a cute orange bow.

Here she is inside the box:

What’s great about these two new figures is that they look like they’re made for one another. There’s no way you can purchase one without the other, they match up perfectly. You can order them now from all good retailers for the $10.99 each.

We’re huge fans of Pop Funkos here at ITM and I personally have far too many of these things sitting around the house.

Funko really has taken the vinyl figure to the next level with their range of Pop! figures and it’s always interesting to see what they come up with next. I still want to get my hands on some of the super limited ones that have previously only been available at San Diego Comic-Con!

Here are just a few Disney characters/franchises that they’ve based the Funko Pop figures on so far:

Related: Why Figment has a strong future ahead of him at Epcot

You get the point, if you have a favorite character then the chances are there’s a POP figure out there to buy!

Are you a fan of these new Disney Halloween Funko Pops? Let us know in the comments below!