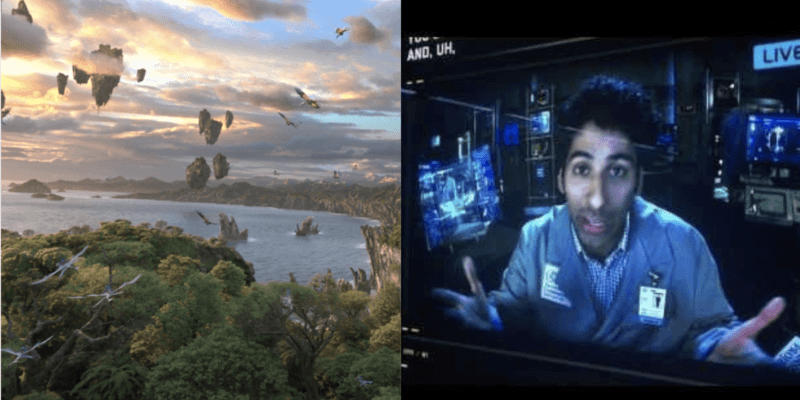 Avatar Flight of Passage is one of the most popular attractions at Walt Disney World. Located in Disney’s Animal Kingdom park, the virtual reality ride allows Disney World Guests to fly their very own banshee through the incredible world of Pandora.

The pre-ride video for this attraction features Dr. Stevens (David Danipour), who has become famous in the Disney fan community for his “And, uh, fly” line during the video.

Now, Danipour has taken to Reddit to let Avatar fans ask him anything. The thread is super fun, especially if you’re a fan of the Avatar film franchise or Pandora – The World of Avatar at Animal Kingdom.

Disney fan and Reddit user Accurate-Profession asked the question that was probably on everyone’s mind when Danipour started his online Q&A session, “Your line ‘and uh, fly’ has become quite a meme in the Disney fan community. Was it scripted exactly as that? Were you given direction on how to read that line?”

Danipour replied, “No, that line was not scripted that way. I just sort of discovered it on the day. Imagineering folks are very creative people so they would give me some creative freedom’s [sic] as well. I do remember when we discovered that line, they did like it.”

The actor goes on to offer up a surprising piece of trivia: He’s never actually been to Disney World or ridden the completed version of Flight of Passage!

In addition to answering questions about his work on television shows like The Good Place and Westworld, Danipour shared some behind-the-scenes facts about how his role in the Flight of Passage video came to be.

Reddit user Hayt7 asked the Dr. Stevens actor, “Did you have any interaction with imagineers [sic] or the Avatar production team for the pre-show shoot or did they just give you a script?”

Danipour responded, “Yes, the Imagineering folks are the best, one of a kind creative people. We had many meetings before the actual shoot. I believe it was shot mainly with Imagineering people and less so with those involved in making the Avatar movie, although I believe there was much collaboration between the two.”

Danipour also answered a question about working with legendary Imagineer Joe Rohde, who has an active social media life himself. Reddit user PujolsRox11 inquired, “What was it like to work with Joe Rohde and James Cameron?”

Danipour replied, “I’ve never met James Cameron, but it would be an honor to meet him one day. I enjoyed many of his films as a youth as a teenager and as an adult. Some of his movies hold up all the way through, which is incredible. Joe Rohde was great to work with, he’s a combination of very creative and encouraging from what I remember on set.”

Although Danipour is done answering questions for now, he asked fans to continue posting so he can perhaps come back to the Walt Disney World Reddit another time.

What was your favorite question and answer during David Danipour’s Walt Disney World Reddit appearance? Tell us in the comments!

Comments Off on Ask Me Anything: Avatar Flight of Passage’s Dr. Stevens Talks to Fans on Reddit!