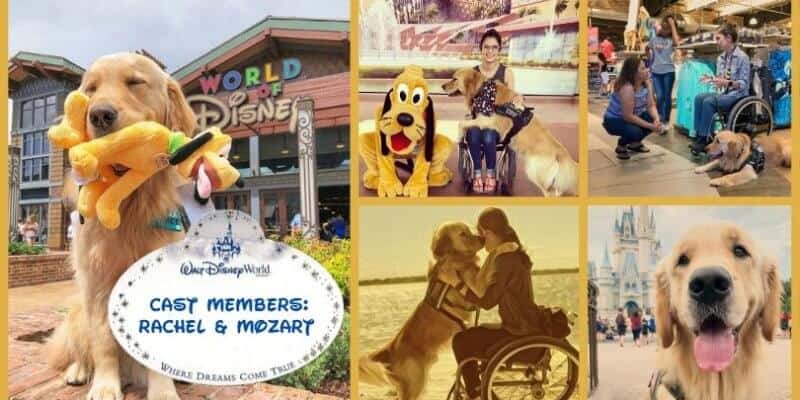 The instagram page @magically.mozart is all about two incredible Disney World Cast Members — Rachel and her four-year-old golden retriever, Mozart.

Related: A Complete Guide To Service Animals at Disney World

Rachel and her four-legged sidekick have been together since 2016, when Mozart was assigned the job of his life: to be Rachel’s mobility service dog, and above all, best friend! But that was only the beginning of their mission together.

Inside the Magic had the opportunity to interview Rachel and discuss Mozart and their journey together on becoming Cast Members. “I’m a born and raised Disney lover, Disney has always been my happy place to leave the crazy world to be surrounded with magic,” Rachel told ITM.

So, it was no surprise that in 2018 Rachel became an official Walt Disney World Cast Member. And of course, Mozart became one too! According to Rachel, Mozart is one hundred percent part of the Cast Member team, with his own cast name tag and ID. “I love that now I have the opportunity everyday to make that magic for guests with my best friend, Mozart, by my side.”

Related: These service dogs traveled to Walt Disney World (and the pictures are the cutest!)

I may not know what each day will hold but I do know that God gave me the best gift in you. • • #servicedog #newhorizonsservicedogs #goldenretriever #chronicillness #myheart #disneycastmember

For the past two years, this Disney Magical Duo has worked at Disney’s Hollywood Studios and EPCOT, and they have done such an amazing job that now, Rachel and Mozart train other Cast Members at EPCOT.

ITM asked Rachel “How did Disney adapt to having Mozart on their team?” in which she replied that the company always makes sure to include Mozart in everything they do as a cast. “Disney has gone above and beyond to accommodate Mozart and make him a valued member of the team,” said Rachel. “When I celebrated my year with the company, they made him a certificate too and gave him a service pin, which is a big deal for Cast Members.”

And when they became trainers, Mozart got his trainer pin too!

Rachel went on to say that her fellow Cast Members and Supervisors make sure Mozart is safe and protected, so he can do his job, and make the duo successful as Cast Members. “Like he’s a member of the team too, because they know it’s important to me. He’s a piece of me and they honor that,” Rachel explained.

But, their love and dedication for Disney does not stop with their Cast Member duties. When the duo is off the clock, they also like to visit the theme parks as guests and enjoy the magic themselves. So, of course we [ITM] had to ask Rachel and Mozart their favorite things to do and what their favorite parks are!

Mozart’s favorite thing to do is meet Pluto and ride on Dumbo the Flying Elephant in Magic Kingdom, while Rachel’s favorite Disney characters are Dug from Up and Mulan. There are even images of Mozart meeting and playing with Pluto on the duo’s instagram page!

While Rachel’s favorite park is Magic Kingdom, Mozart’s favorite park reflects his furry animal side. “Mozart likes Animal Kingdom the most because he likes all of the animal sights and smells,” Rachel said.

Did you know each Disney park, the resorts, and Disney Springs have their very own unique, reusable bag that you can use instead of plastic bags and take home as a terrific souvenir? I think we’ll be collecting them all. ?♻️? • • #servicedog #goldenretriever #animalkingdom #disneycastmember #disneyworld #magicallymozart #goodboy #recycle #reducereuserecycle

Will you be following Rachel and Mozart on Instagram to keep up with their magical Disney journey? Let us know in the comments below.