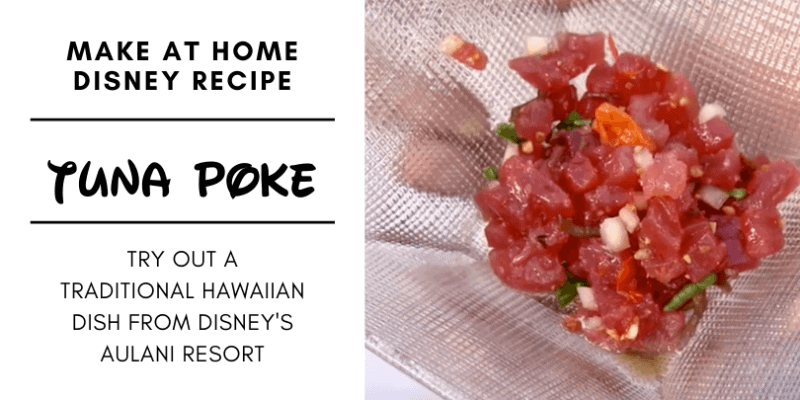 Have your vacation plans for the summer come to a screeching halt? Yeah, mine too. And as so many people are finding themselves in this same situation, it can feel like a discouraging summer is on the horizon this year.

However, your tropical vacation doesn’t have to be cancelled if you can just use a little imagination and be ready to whip up some Disney Magic from wherever you are.

If you’ve never been, Disney’s Aulani Resort and Spa is a beautiful resort sitting on the beaches of Ko Olina on Oahu. It brings a fun mix of Disney Magic to a traditional and breathtaking island backdrop.

Poke is typically a light meal or appetizer that is made up of diced raw fish and a variation of seasonings. It’s a traditional dish in native Hawaiian cuisine. So if you want to bring a taste of the islands right to your kitchen, you can whip up this quick and easy dish as a lunch, and sit outside in the sun!

Ready to get started? Here’s what you’ll need.

Will you be trying out this island favorite? Let us know in the comments below.