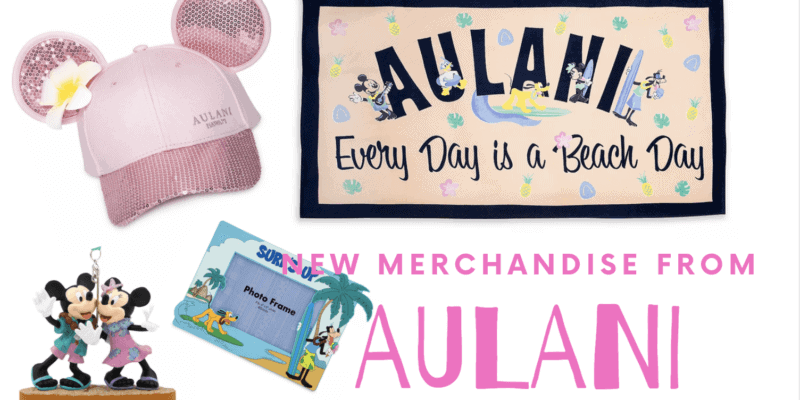 Spring break this year may have been a bust, but summer vacation is just around the corner and we know we’re hoping for a getaway to Aulani, A Disney Resort & Spa!

Aulani’s merchandise team is gearing up for the summer season with two adorable new collections that have just hit shopDisney. The first collection features Hawaii’s own Stitch and Angel, while the second series showcases Minnie and Mickey loving the beach life!

This adorable pink Minnie Mouse ears ball cap is ideal for everything from hiking Mauna Loa to eating a Hawaiian Dole Whip by the pool!

No matter where your journey to Hawaii takes you, you’ll be prepared in this adorable Disney sequin hat. It features a plumeria blossom embellishment and an embroidered “Aulani Hawai’i” logo.

We especially love the adorable pastel print under the bill!

This adorable Aulani beach towel will absolutely make you feel like “Every Day is a Beach Day,” even if you’re not currently on a tropical island.

The Disney ornament features a satin hanging ribbon and sparkly glitter accents on Minnie’s Hawaiian outfit and the sand.

Whether you’re looking for a cute way to display a picture from a past trip to Aulani or you’re getting ready for your next vacation to Disney’s Hawaii resort, this 4×6 picture frame featuring Goofy and Pluto is a must-have!

The silicone Disney photo frame says “Surf’s Up” and features the Aulani hotel in the background as Pluto rides the waves and Goofy enjoys an ice cream cone. It’s the perfect spot for your favorite memory of your time in Ko’Olina.

This 21″ Aulani rolling suitcase is the cutest way to travel on your next trip to the Hawaiian Islands! The front of the Disney carry-on suitcase features a blue Mickey ears treat with the Aulani logo on the cone.

The back showcases the same cute tropical print from the Hawaiian Minnie ears hat! You’ll love this durable Disney luggage.

Tell us what new Mickey and Minnie Aulani merchandise you’re buying first in the comments!

Do you have a Disney Hawaiian vacation planned when the property reopens? If so, let the Authorized Disney Vacation planners at Academy Travel handle all the details of your trip to paradise!

Comments Off on Live the Tropical Life At Home – NEW Mickey and Minnie Aulani Merchandise!