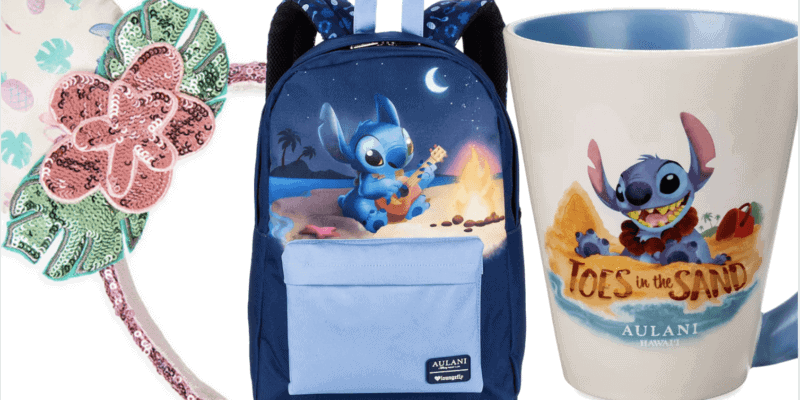 If you’re anything like the ITM team, you’re more than ready for a trip to the tropics. Even though we can’t visit Aulani, A Disney Resort & Spa right now, shopDisney is helping us travel to paradise without leaving home!

Brand new Aulani merchandise has landed online and it’s perfect for taking a mental vacation while you’re stuck in the house. Here, we’ll dive into all of the Hawaiian-inspired pieces featuring Stitch and Angel!

We are obsessed with this Stitch and Angel ears headband featuring our two favorite aliens and a sequin plumeria flower! The satin ears have a tropical pattern featuring Stitch, Angel, Hawaiian leis, the Aulani logo, and pineapples.

As per shopDisney, these Stitch Aulani ears have the following features:

The next item in the new Lilo & Stitch inspired Aulani collection is this bold navy beach towel featuring Stitch and Angel!

This 34″ x 64″ Disney beach towel features Polynesian detailing, including a tribal design border, tiki torches, and a palm tree. The Stitch towel also has the Hawaiian Disney resort’s logo and an outline of the Aulani hotel.

Next up is the cutest Stitch coffee mug! Imagine you’re sitting in Hawaii with your “Toes in the Sand” alongside Lilo’s best friend as you sip your morning coffee from this ceramic Disney mug.

Our favorite part of this Aulani mug is the Stitch ear handle — too adorable!

Last, but not least, is this Aulani Loungefly backpack featuring Stitch under the Hawaiian stars. The Disney alien strums his guitar on the beach at night, presumably playing an Elvis song!

The navy Loungefly backpack is full-size at 18″ H x 12″ W x 5″ D. It has the following features, as per the ShopDisney website:

We can’t get enough of all of this new Stitch Aulani merchandise! What’s your favorite piece from this tropical Disney collection?

Ready to visit Stitch in person?

If you’re looking to book an Aulani, A Disney Resort & Spa trip as soon as the property reopens, contact the Disney vacation experts at Academy Travel. They’ll help you plan your family’s dream trip to Disney’s little slice of paradise!