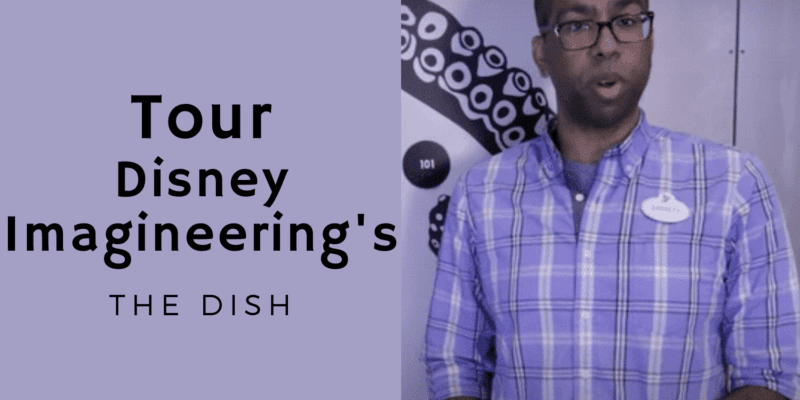 Imagineering junkies know all about the Walt Disney Company’s Digital Immersive Showroom, AKA “the DISH.” This super cool space allows the Imagineering team to to pre-visualize how an attraction or other Disney Parks experience will look in advance.

This means that Imagineers can test various ideas for an attraction before construction even begins. In addition to helping them create the best possible immersive experience for Guests, the DISH can solve structural and logistical issues.

He explains how WDI uses the DISH to allow designers, architects, and other Walt Disney creatives to create the incomparable Disneyland and Disney World experiences that make Disney theme parks the best in the world.

The Disney Imagineer crew uses the DISH for every new theme park development. When Star Wars: Galaxy’s Edge was in development at Disneyland Park and Disney’s Hollywood Studios, this futuristic space helped bring Batuu and its amazing attractions to life.

At Disney’s Animal Kingdom, the Digital Immersive Showroom allowed everything from the iconic Tree of Life to the banshees at Pandora’s Flight of Passage to go from imagination to reality.

A Glimpse Inside Imagineering

Disney’s recent #DisneyMagicMoments initiative has offered a rare glimpse into the behind-the-scenes efforts that keep Disney magic alive, even in these unprecedented times.

Fans are rarely allowed to see inside the space where Walt Disney World Resort and Disneyland go from dreams to reality. Have you been having fun with these virtual Imagineering office tours? Tell us your favorite part so far in the comments!

Experience the magic yourself.

If you can’t wait to get back to the Disney Parks when they reopen, allow the Authorized Disney Vacation Planners at Academy Travel to help you put together your perfect trip.

Whether you can’t wait to get back on Star Tours or you’re just looking forward to a night at Disney’s Grand Californian, the Academy Travel team is here to help.