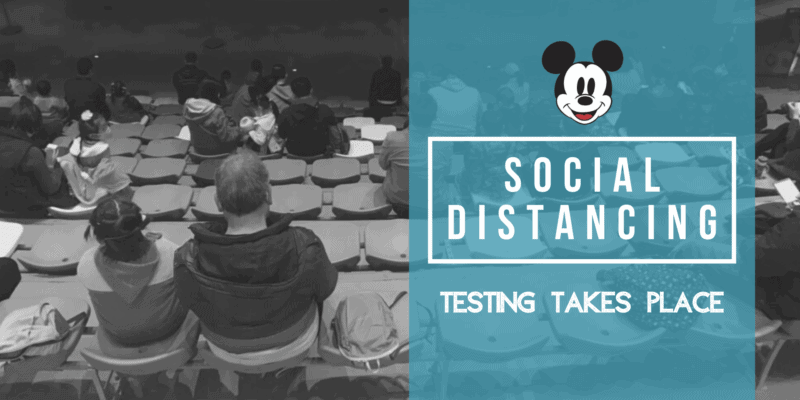 Schools in Shanghai are slated to reopen in less than a week, and the public is looking eagerly to continue their children’s education. Meeting this large tick on the reopening scale, Shanghai’s residents have started to turn their attention to other business benchmarks. We spotted a Shanghai Park lover on Twitter, speaking to the school reopening date and internal testing at Shanghai Disneyland. The user’s tweet talks about Cast Members being seated in every other ROW (not seat) and having family groups separated from each other. While there is no mention of the exact measure of the social distancing, we expect this is a part of the newly started tests at the Disney Park.

Perusing this feed, we find that @gourmetdyy obtained some photos of the theme park “Shanghai Haichang Ocean Park” as it implemented social distancing rules and body temperature measures. You can see in the post below how far apart each family group is from one another, obviously leading to a lower seating capacity for each show. Whether or not Shanghai Disneyland (or any other Disney Park worldwide for that matter), will adhere to this same practice is unknown at this point.

Shanghai Haichang Ocean Park reopened as 1st theme park in SH！ They check body temperature for each attraction, lead guests to be seated every other row，reduce the capacity of the indoor show ，even use some virtual line up system to avoid gathering @ThemeParkReview pic.twitter.com/rzxGW0r0G2

The visuals given in the above tweet collage (a family with masks on, lower capacity crowds, social distancing in theatres) paint a grim but solid picture of what we might expect in Shanghai Disneyland and in the Disney Parks here in the United States. US Task Forces like the one Bob Iger serves on in California certainly are looking at these and other measures to reopen more business in our country as we attempt to return to a “new normal.”

It’s been reported the Shanghai Disneyland Cast Members are continuing to test rides and new protocols. It’s certain that maintenance by essential workers in sanitation environmental care and IT still has a foothold in the “abandoned” looking areas. Whatever many tests are taking place, we’re certainly looking forward to seeing what official announcements are made as we look to the new future of “being inside the parks.”

You can also see from today’s recent update via Twitter, Shanghai Disneyland Cast and Crew are testing protocols for Parades and the main castle light show, Ignite the Dream, is being enacted. We’re not sure if this picture is recent or “for attention” as many posters choose to use an eye-catching photo to allow other users to pause and read the copy. If more develops, we will continue to update this post.

Do you think these social distancing measures will have a profound effect on Guest experience? Leave us a comment below!