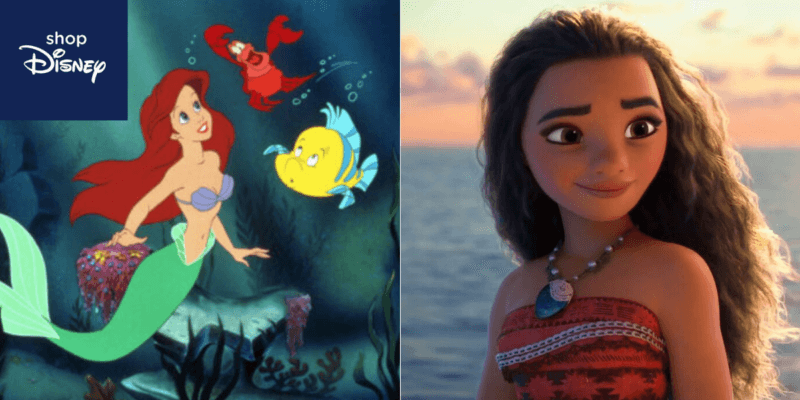 Get ready to go Under the Sea and across the Ocean with shopDisney this week and next as your favorite online Disney store gets ready to host two epic Disney movie watch parties on Twitter!

Called #shopDisneyMovieTime, the first movie scheduled is The Little Mermaid on Thursday, April 30, at 5:00 pm PT (8:00 p.m. ET), followed by Moana the following Thursday, May 7, at the same time of day.

shopDisney said in a press release sent to Inside the Magic:

Fans can go under the sea with Disney’sThe Little Mermaid and join the watch party from home this Thursday, April 30 on Twitter at 5PM PT.

You can also tune in the following week on Thursday, May7 at 5PMPT to see Disney’s Moana and keep following along with #shopDisneyMovieTime for more real-time updates!

If no one in your family has taken part in one of these, Twitter watch parties are a great way to enjoy the experience of watching a movie with tons of other fans from the comfort of your own home.

What makes a watch party with #shopDisneyMovieTime different than, say, Disney simply posting a video the “Happily Ever After” Fireworks spectacular is that you will be able to share the present moment with other Disney fans watching the movie at the exact same time, and you can comment and share your thoughts on your favorite moments with everyone else.

Now, we all wish we could be watching a Disney movie together on the lawn of one of the Walt Disney World Resort Hotels or cuddled up in southern California at a Disneyland hotel, but a twitter watch party is the next best thing. And The Little Mermaid and Moana are both great movies to help us start getting in the mood for another unforgettable summer of adventures.

The watch parties are also just the latest way Disney has worked to bring the magic of its parks and films to its fans at home during the past several weeks. Spearheaded by the #DisneyMagicMoments campaign, Disney has delivered streams of fan-favorite parades in shows from Disney Parks all over the world in stunning HD, super-secret recipes of theme park snacks, and special tributes.

Read More: Disney Releases Series of Park Shows and Ride-Throughs for Fans While Parks are Closed

Are you going to join the watch party? Let us know in the comments!

Comments Off on Disney is Hosting Watch Parties of “The Little Mermaid” and “Moana” on Twitter!