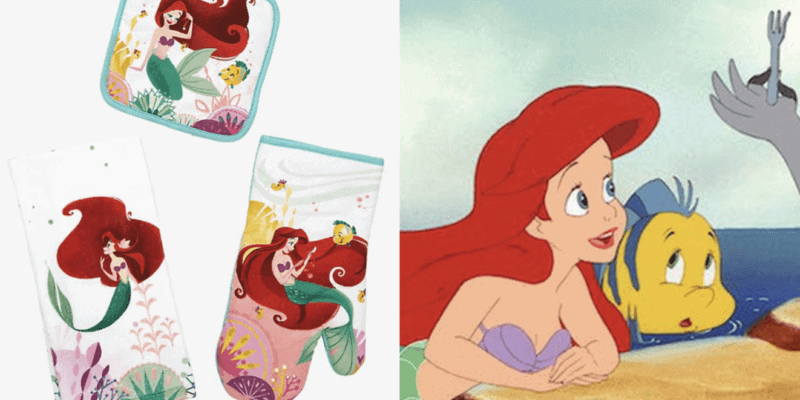 If you’re like a lot of people, you’ve been cooking more at home than you ever have before. Instead of being frustrated by this, look at it as the perfect excuse to add some cute Disney kitchen accessories to your space! This BoxLunch-exclusive set of The Little Mermaid inspired kitchen accessories is an adorable way to infuse your kitchen Disney magic.

Ariel loves trying new things, so let this dish towel, pot holder, and oven mitt featuring the mermaid Princess and her best friend, Flounder, inspire you to cook-up something new next time you’re making dinner (we would recommend against crab, though, for Sebastian’s sake).

We love all three pieces in this affordable The Little Mermaid kitchen accessories collection. Priced at just $19.90 for the set, you’ll definitely get your money’s worth.

The Ariel kitchen towel features the red haired mermaid swimming through an undersea paradise, complete with shell shapes and seaweed. The dish towel measures 18″ x 25,” making it the perfect size for drying hands or cleaning up spills.

The BoxLunch exclusive Little Mermaid oven mitt and pot holder showcase Ariel showing Flounder how to use her favorite kitchen necessity, a dinglehopper! The oven mitt measures 7.5″ x 13″ and the pot holder is 8″ x 8″.

All of the items in The Little Mermaid BoxLunch kitchen series can be machine washed cold and laid flat to dry to prevent shrinkage.

What’s next for Ariel and friends?

With the live action production of The Little Mermaid halted just 9 days before filming was set to start, Halle Bailey (Ariel). Melissa McCarthy (Ursula), and the rest of the cast and crew are simply waiting for word that they can return to their now-abandoned set at Pinewood Studios in London.

There is good news, though! Composer Alan Menken has confirmed that the score for the live action Little Mermaid remake has been completed. Fans of the aquatic Disney Princess can look forward to several new songs and old favorite like “Under the Sea.”

Comments Off on Get Inspired to Cook With Little Mermaid Kitchen Accessories!