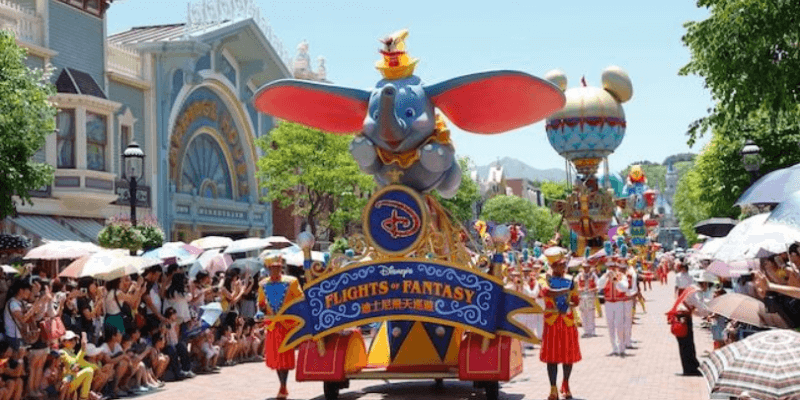 I challenge you to not be singing and dancing to this parade by the end of the two minute video.  Hong Kong Disneyland released a compacted video version of their Flights of Fantasy parade with the hashtag #MagicThrowback.  It’s a great pick me up if you’re in need of some joyful positivity!

The soundtrack to this parade is so attracting that it’s very hard to keep yourself from singing the chorus.  Mickey, Minnie, and friends start the show in dazzling costumes soaring high in a flying ship.  Then it highlights different clips along the parade and how much the guests are enjoying the show.

Winnie the Pooh is in a honey pot hot air balloon surrounded by friends.  It’s not a fantasy parade without a Disney princess float and all their majestic features!  How special is it that you bring each and every little princess nearby into the parade route?  Now, the wind is blowing us into the wild with Jungle Book and The Lion King characters.

Tinkerbell spreads her pixie dust all over us, as she always does.  Right in tune to the song singing, “we’ll sail away just me and you,” here comes Lilo and Stitch.  Whatever this rocking boat thing is on this floral float really needs to be a new Disneyland theme park attraction because it looks so fun to ride!  The parade closes with some of our favorite Toy Story characters like Woody, Jessie, Buzz Lightyear, and Toy Soldier.

This is only the latest of Disney Park videos that have come out on Youtube recently.  Last week, Walt Disney World shared their Happily Ever After Firework Show from Magic Kingdom, which is always an emotional one.  There are also a ton more parades you can check out from home like the new Magic Happens Parade at Disneyland  A ton of parades have happened in Disney Parks around the world over the years and it’s always interesting to see what they come up with for different floats!

Since we can’t hop on the MTR at Sunny Bay Station and make it over to Lantau Island where Hong Kong Disneyland Resort is, we’ll happily settle for all the magic throwbacks and moments they want to send our way.  “It’s a sky high celebration so come on!  Come on!  It’s Time to Soar!”

Comments Off on It’s a Sky High Celebration With This Flights of Fantasy Parade Video!