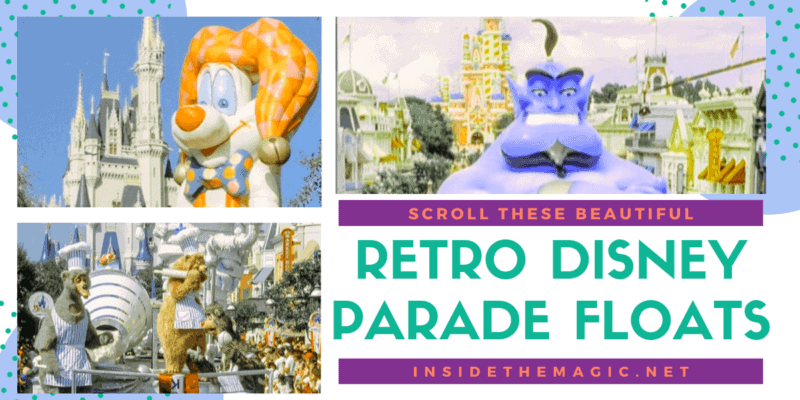 Are you old if you lived through something that’s now considered retro or vintage? We’re not sure what the mark for age really is, but nostalgia is hitting us hard for the old 25th anniversary Walt Disney World birthday cake castle. We would take it in a heartbeat if it meant we could get back into the Disney Parks faster! Some other retro eye candy recently caught our watchful eyes on Instagram in the form of retro Disney parade floats from both the early days of Disneyland Resort and Walt Disney World Resort. Take a peek at the vintage fun from coast to coast!

Sorcerer Mickey Mouse leads the broomsticks down Main Street, U.S.A. in the 1970s. Check out the vintage styling of Mickey’s features and the larger than life broomsticks with perfect details. This “Fantasy on Parade” route photo sweeps us off our feet!! Better be sure Wizard YenSid isn’t anywhere nearby!

Next up, comin’ down the track, we have Casey Jr. and his circus rolling down the street. The train is even engineered by a faux driver, so the magic is real! Disneyland Retro’s Instagram is quoted saying, ” Dumbo & Casey Jr. coming down Main Street, U.S.A. during a parade, circa 1960s.” We can see Dumbo’s little puppet head peeking from the train, which is perfectly magical! The Cast Members alongside the train are ducking down to provide the kiddos on the curb a better view of the parade, and right behind Casey, you can see what looks like Clara Cluck’s Barnhouse featured in modern Mickey’s Boo To You Halloween Parade!

Magic flies right into your lap with the original Blue Fairy float in Walt Disney’s own Main Street Electrical Parade. Her gorgeous dress is actually hundred of lightbulbs, cascading in front of viewers sitting along the front hub curb in Disneyland Park. The electrical parade has morphed over the years, visiting both Disneyland Park and Magic Kingdom in Florida.

Not to be left behind, we have the Most Magical Place on Earth. The Magic Kingdom Disney parade floats in 15 Years of Magic ran from 1986 to 1987. The parade was mostly a birthday celebration (think of the modern Move It Shake It) for Magic Kingdom and Walt Disney World Resort. Below, you see walk-around versions of Wendell, Shaker and Liver Lips of the Country Bear Jamboree attempting to cook a giant birthday cake, and it’s not going well!

By the time the 1980s rolled around, the Main Street Electrical Parade had moved over to Disney World, and making a scene in front of Cinderella Castle. Here, we have the electrical version of Casey Jr. starting the route, driven by our own wonderful Goofy. You can see Mickey Mouse peeking from the back-top of the drum and Minnie Mouse sitting in the front. Lots of wonderful character!

Why should I worry? Why should I care? Don’t worry, actually! Doger has you covered in the original Walt Disney pictures Oliver and Company float in 1988. Magic Kingdom hosted these dogs and cats as a PRESHOW (that’s right, it wasn’t in a particular parade) Disney parade float to the official parade in 1988, Come to the Fair. The film’s classic tune, “Why Should I Worry?” gave guests an occasion to clap along at the top of Main Street, U.S.A. Wouldn’t it be lovely if Disney still had press floats for all the movies? I’d love to see these characters come to life for float rides and meet and greets!

Surprise! It’s a huge celebration in honor of Walt Disney World Resort’s 20th birthday. This anniversary parade took place in the 1990s, and was a lot of fun with extremely popular characters of the time. Roger Rabbit appears as his own jester above himself in dynamite style in this Disney parade. At the writing of this article, Who Framed Roger Rabbit has turned 22 years old! Can you believe it? We’d love to see the resurgence of retro Disney parade floats like these. What fun the 50th anniversary of Walt Disney World could be with a look back at vintage styling!

Marching through Magic Kingdom, right down Main Street U.S.A., we have the fantasy parade style for the 25th Anniversary Parade in the 1990s. Genie was larger than life in this Macy’s parade-style balloon. You can see tiny Jasmine and Aladdin down below (but not seated on carpet!), and that awesome looking cake castle (we’re sticking to it… we’d take that cake if it meant we could do back to the Disney Parks!) looming in the background.

Which Retro Disney Parade Float speaks to you? Did you get to see any of them in person? Leave us a comment below!