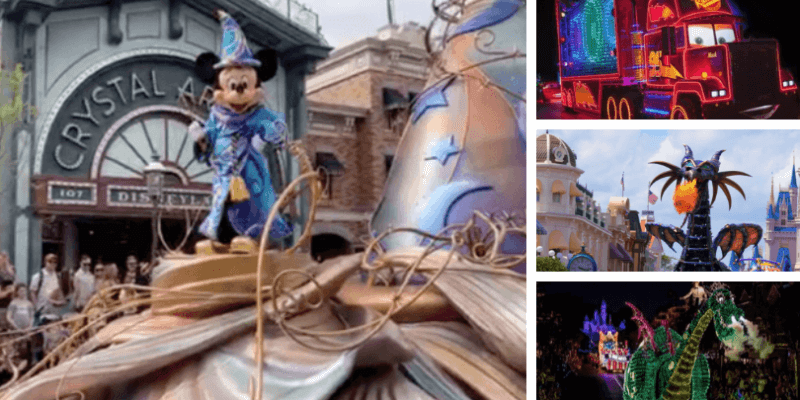 Another day stuck at home, and another day away from the magic as the Disneyland Resort and the Walt Disney World Resort are now closed until further notice. Some of the best sources of magic we could get at a Disney park were the parades. From the now-classic Main Street Electrical Parade to the latest Magic Happens Parade at Disneyland, every Disniac has their favorites.

So we thought we’d try to bring the magic home to our readers, once again. This time, by sharing our collection of Parades from both Disneyland in California and Disney World in Orlando. So, find your spot and check it out!

Let’s start with the latest and greatest! Magic Happens is the latest parade to debut at the U.S. Disney Parks. With a fantastic soundtrack by Todrick Hall, incredibly stylish costumes, and jaw-dropping floats, Magic Happens is a great reminder that we don’t need wings to take flight, magic doesn’t stop at midnight, and shooting stars were created for wishes. Check out the hottest celebration in the streets below:

Jumping over to Walt Disney World now, let’s take in the Festival of Fantasy Parade. Running daily at 3:00 pm, this parade features some of the most elaborate floats of any Disney daytime parade. Those floats include a double-decker Peter Pan float, a swinging Tangled float, and–of course–the iconic fire-breathing dragon Maleficent.

So, here we go! It’s the Festival of Fantasy!

Now let’s stand up out of our seats and get moving with the Magic Kingdom’s “Move It! Shake It! MouskeDance It!” Street Party! Join Mickey, Minnie, Donald, Goofy and some of their pals like Nick Wilde and Judy Hopps and Aladdin’s Genie to cut loose and have some fun! This is a great way to give kids a break from home school and get the energy out of their system! Check it out!

Now, let’s go have some fun with our favorite Pixar Pals! Featuring a score that smashes all of the best soundtracks together, Pixar Play is a fun tribute to Buzz and Woody, Mike and Sully, and all of our favorite Pixar characters we’ve come to know and love. Check it out!

Let’s throw it back to just before Magic Happens happened. Mickey’s Soundsational Parade was the staple mid-day parade of Disneyland Park and was one of the longest-running Disneyland parades in recent memory. It’s a fun, vibrant parade, and we can understand why it lasted so long! It would be replaced this year by the new Magic Happens parade.

Let’s end with the parade which is, in this writer’s humble opinion, the best parade to ever run at any park in Disneyland or Disney World. With an intro that harkens back to its direct predecessor–Main Street Electrical–music from Owl City, and stunning floats from favorite Pixar and Disney Animation films, Paint The Night was a spectacular addition to the parks and the perfect pairing to Disneyland’s Diamond Aniversary celebration fireworks show, “Disneyland Forever.”

Alas, the parade was soon moved to Disney California Adventure and then retired at the Disneyland Resort. While a version of it lived on at Hong Kong Disneyland, fans in the United States are still left looking at replays like this and thinking, quite appropriately “When can I see you again? When can we do this again?”

Soon all of our wishes will be granted and we will be able to do this again. Disney’s theme parks will be reopened and we will be able to recharge our reserves of Disney Magic once again on some of these fantastic parades. But until then, all we can do is look back, make these video full screen, turn off all the lights, and let technology, memory, and a little imagination continue to fuel the little Disney fire left glowing.

Plan Your Next Disney Vacation

It’s never too early to start planning your next trip to Disneyland or Walt Disney World and our friends at Academy Travel are standing by to help. Backed with years of experience, they know what it takes to work with you personally and get you the best possible deal on your trip. Click here to learn more and receive your free, no-obligation quote today!

Do you miss the Disneyland/Disney World Parades? Which one do you miss most? Let us know in the comments!