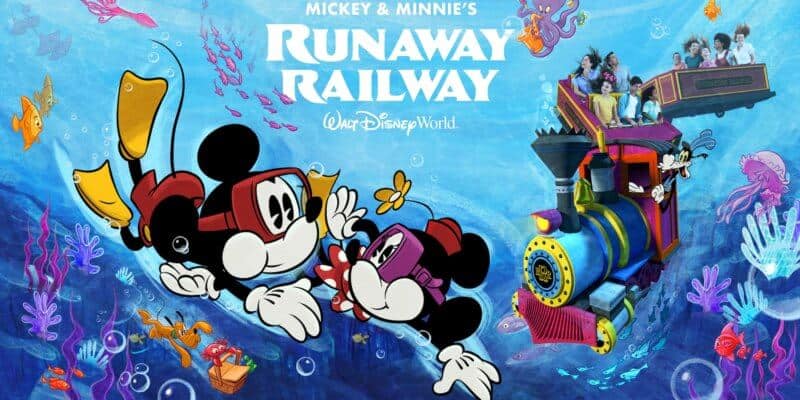 YOO-HOO! Opening day for Mickey and Minnie’s Runaway Railway is finally here! The long-awaited trackless ride is a first for Mickey, who waited through 91 years of meet and greets and performances for his own ride-through attraction. Inside the Magic was on hand yesterday for the ride preview and first thoughts, but as guests mobbed Disney’s Hollywood Studios for an 8 am March 4, 2020 opening, Mickey and Minnie’s Runaway Railway Wait Times blossomed into more than 300 minutes. As the first hour of the Park’s opening waned, Runaway Railway wait times sank to 240, but are expected to hold strong throughout the week as Walt Disney World Resort guests get to ride along with the Fab Five.

According to an earlier article on the OC Register, Inside the Magic learned that Mickey and Minnie’s Runaway Railway will have two storylines in the attraction. Much like television scriptwriting, it will have an “A” story and a “B” story. You will find much of the same idea in many of the new Mickey shorts, so it’s a natural addition to the attraction. You’ll also find tons of historical easter eggs and nods within the attraction, but those remain to be seen.

Chapek was interviewed as Star Wars: Galaxy’s Edge premiered on both the East and West Coast of the United States, saying, “We got over a million people through the attraction over at Disneyland so we’re learning and it’s operating extremely well…so the fact that we don’t have backup lines is actually going according to plan. That’s not a great guest experience, so we don’t define success as 10-hour waits. We define success as a great guest experience. We like to move people through and have a great time. We have a virtual queue planned if we need to deploy it.” He held that this is how they define success.  With the Millenium Falcon holding lines at 45-70 minutes and Slinky Dog Dash well over 2 hours in most cases, guests have been scrutinizing his comments. At over six years old,  Magic Kingdom’s Seven Dwarfs Mine Train STILL touts a 2 to 3-hour wait. Chapek’s statement doesn’t seem to hold water here.

Minnie and Mickey’s Runaway Railway has a standard Standby queue line (The Great Movie Ride had a massively expansive queue area that could hold hours worth of guests) as well as a FastPass+ queue. Guests were able to secure FastPass+ selections for the Runaway Railway last month, ahead of their trips. Hopefully, the combo formula that is used on other attractions at Walt Disney World will work well here, too. Though there has been speculation that FastPass+ is due for an overhaul and perhaps a paid system more like MaxPass at Disneyland Resort.

Upon exiting the ride, Guests should be able to explore the wide array of merchandise waiting in the gift shop. From bags and shirts to plushes and collectibles, the sky is the limit on what you can pick up to remember your locomotive experience.  We want that sweet train whistle and some of the plushes! (If the vintage style Mickey is more your speed, check out the new cozy knit plushes for a limited time!)

Will you wait to see Mickey and Minnie’s Runaway Railway or will you try for a FastPass+? Leave us a comment below!