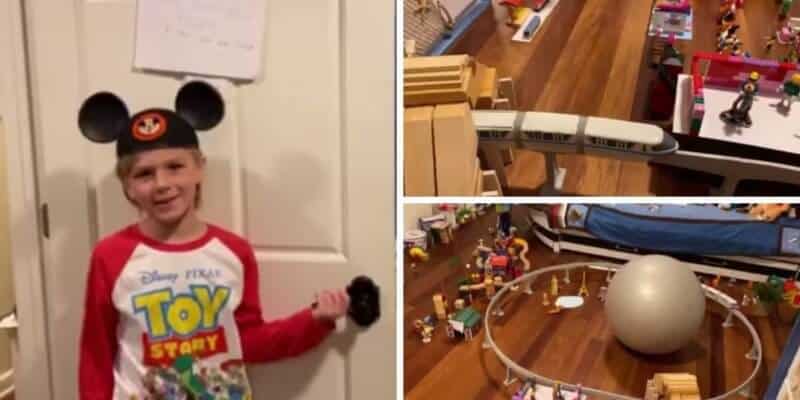 This future Imagineer isn’t letting isolation stop him from bringing a bit of Walt Disney World into his own home — Literally!

8 year old Kai decided to bring his imagination to the table when he worked incredibly hard on building the entire Walt Disney World Resort in his own bedroom! (And let me tell you, the details are amazing.)

We even had the opportunity to talk with Kai about his recent creation. “I just wanted to feel the magic and make my own Disney World, so people smile,” he stated.

Debbie, Kai’s mother, loves watching Kai bring his imagination to life and was blown away when she saw what Kai had recently created. “I love watching Kai’s passion and imagination flourish as he continues to dream of becoming an Imagineer,” she said. “He is such a loving and charismatic boy. I feel so blessed to be his mom.”

Debbie continued “The silver lining amongst this unprecedented time of social distancing is that we all have been given the gift of more family time together. A true blessing.”

Related: Missing the Disney Parks? Have a #DisneyFromHome Trip Like This Fan!

Kai begins his Walt Disney World tour by opening up his bedroom door to a whole world of magic and imagination. At first glance, you will see Magic Kingdom Park, EPCOT, Disney’s Animal Kingdom, and Disney’s Hollywood Studios, but just wait until we dive in a bit deeper.

We begin over at Magic Kingdom Park where Kai points out Main Street USA (complete with the Emporium, the Main Street Bakery, and the train station!) And it must be 3:00 pm because the Festival of Fantasy Parade is heading right down the middle. The camera then pans to the opposite side of Main Street USA where we get a beautiful view of Cinderella Castle.

Kai even built the Magic Kingdom station with a running monorail! Right next door is the Disney’s Contemporary Resort, which Kai says he has always wanted to stay in! “Over here we have the Contemporary which is the hotel I’ve always wanted to stay in because it has a monorail that goes through it. It’s just a dream that I’ve had for a long time.”

But — Back into the Magic Kingdom, Kai also built some of the popular attractions including the Mad Tea Party, Under the Sea with The Little Mermaid, Goofy’s Barnstormer, Pirates of the Caribbean, Big Thunder Mountain Railroad and the Tomorrowland Speedway.

Moving onto the next part of our tour — Disney’s Hollywood Studios! We begin with the newest Disney attraction Mickey and Minnie’s Runaway Railway, complete with the adorable ride vehicle that guests board on.

We then visit Tower of Terror and Star Tours, complete with an R2-D2! But that’s not all because as I mentioned before, Kai’s detail is incredible. He didn’t just build the theme parks, but he included Disney’s Skyliner station, which transports guests from Disney’s Hollywood Studios to EPCOT as well as other Disney Resorts.

Back into the theme park — Kai then brings us into Toy Story Land (which is personally my favorite part). When watching the video, just picture what it is like actually being in the park. It is spot on! We first walk in and see a giant Woody on our right, which then brings us to Toy Story Mania. When you look over at Slinky Dog, you see Kai even built Jessie trying to put up the Christmas lights — Just like inside the theme park!

Kai also included the Alien Swirling Saucers, Woody’s Lunchbox and even the restrooms! And as you continue on the tour, you quickly find yourself in a galaxy far, far away — Star Wars: Galaxy’s Edge — Complete with Stormtroopers and all.

Related: Take a Break from the Quarantine – Let’s Have a Virtual Day at Disney World!

Kai allows us to jump on the Skyliner to head on over to our next destination — EPCOT. We begin at the EPCOT ball, also known as Spaceship Earth, and continue into World Showcase. Kai made sure to include the beloved Disney character, and EPCOT’s mascot, Figment!

Kai even built Buena Vista Drive, which we jump on to bring us to our final park destination — Disney’s Animal Kingdom.

Related: Mickey and Minnie Share Sweet Messages On Social Media To Help Us Get Through

Over at Disney’s Animal Kingdom, 8 year old Kai shows us the famous Tree of Life as well as some of the popular attractions within the theme park including Expedition Everest and Kilimanjaro Safari.

You can watch the entire video here:

Little future imagineer creates Disney World in his bedroom after it closes due to Covid-19 and he was supposed to be there today. ❤️

How incredible is this at home Walt Disney World Resort? Kai has a bright future ahead of him! Thank you for sharing with us.