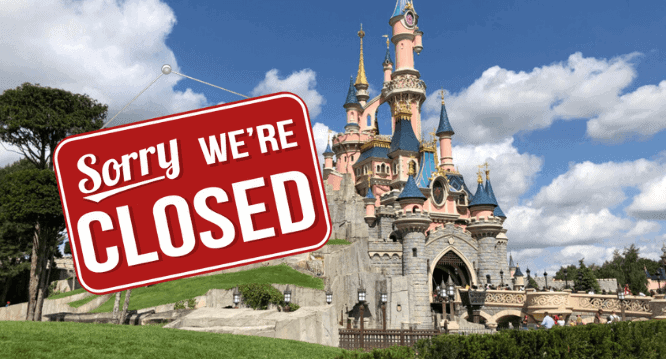 The latest update on the Disneyland Paris website states that Disney has waived cancellation fees for vacations through mid-April. At this time, it’s unclear if Disneyland Paris will remain closed beyond the end of March.

Disneyland Paris will temporarily close starting Saturday, March 14th, 2020.
Based on updated direction from French authorities, the temporary closure of Disneyland and Walt Disney Studios Parks will begin Saturday, March 14th through the end of the month.
The Disney Village will temporarily close as of the morning of Sunday, March 15th. Additionally, our Disney Hotels will follow with closures as our current guests depart.
If you hold a reservation at a Disney Hotel for arrivals while our Parks are closed, you have until April 15th 2020 to modify or cancel your reservation without fees. These conditions also apply if your arrival is between April 1st and June 1st 2020 (for transport, transport carriers’ policies will apply). For more details on our commercial policy.
We encourage you to fill in the electronic form in the following link to help process your request : https://contact.disneylandparis.com as well as checking regularly disneylandparis.com for more updates.

It is now being reported that the French government has advised Disney to close Disney Village — the “Downtown Disney” area of Disneyland Paris — beginning Sunday, March 15. Originally, it was going to stay open through the duration of time that the parks would be closed.

The hotels at Disneyland Paris will also be closing as soon as all guests have checked out.

Due to enhanced preventive measures by the French government, Disney Village will close as of the morning of Sunday March 15. Disney Hotels will also close as soon as the last remaining Guests have checked out. pic.twitter.com/iyTr02oyYd

The most recent update from Disneyland Paris states that Disneyland park and Walt Disney Studios park will be temporarily closed beginning Saturday, March 14, instead of Sunday, March 15. The closure date was moved up based on direction from French authorities.

It’s getting real out there! Oui, oui! Disneyland Paris Resort will be closed from the morning of March 15th through the end of the month, ABC News is now reporting. They have an official statement from Disney which they shared on Twitter Thursday night, March 12, 2020, as well as Disney Parks’ official statement appearing on the social platform.  With Disneyland Park and Disney’s California Adventure just having announced closures hours before, we here at InsideTheMagic.net feared these next steps were imminent.

BREAKING: Theme parks at Walt Disney World Resort in Florida and Disneyland Paris Resort will close from the morning of March 15 through the end of the month, spokesperson says. https://t.co/vGdxaQyuwa pic.twitter.com/SdUBmTEwoQ

@DisneyParksNews posted on twitter at 8:30 pm that, “In an abundance of caution and in the best interest of our Guests and employees, we are proceeding with the closure of our theme Parks at Walt Disney World Resort in Florida and Disneyland Paris Resort beginning at the close of business on Sunday, March 15th, through the end of the month.”

Cast Members will be paid through the closure, which is a total relief. There is no doubt some will stay busy cleaning up, with maintenance, etc. If not and they are indeed home and resting, they will still be paid. All hotels at Walt Disney World Resort and Disneyland Paris will remain open. The retail areas like Disney Springs and Disney Village at Disneyland Paris will remain open, as well. 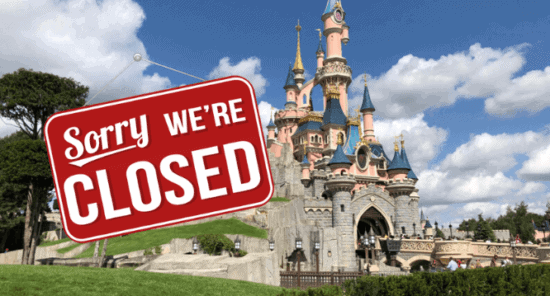 It is a wise choice to stay ahead of this novel virus which is still being researched. We applaud the overabundance of caution and hope that after the closure periods pass, we are back to normal and enjoying our magical time in the Parks. In the meantime, help yourself to some online shopping or perhaps the Disney movies available on Netflix or Disney+. 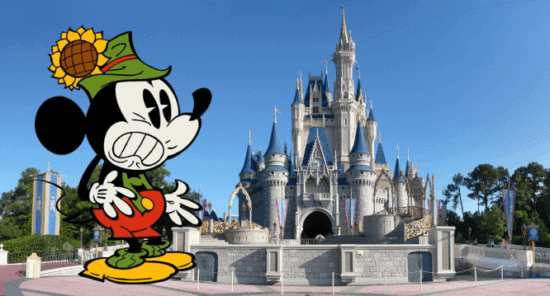 Leave us a comment and let us know if your vacations were affected. We’d love to hear your stories!

Comments Off on Disneyland Paris Update: Disney Waives All Cancellation Fees for the Next Month