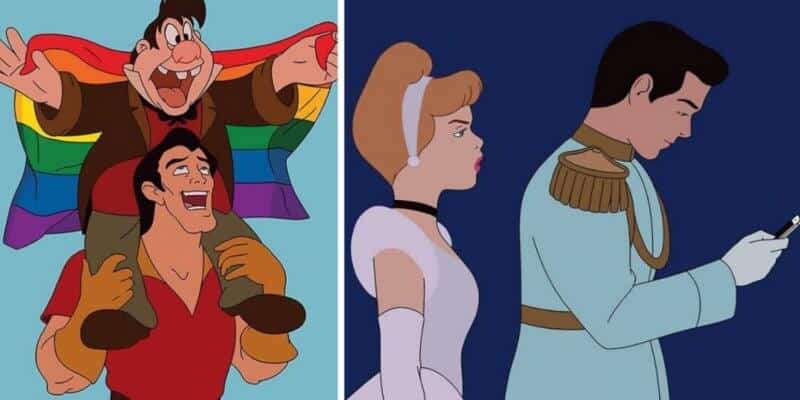 It’s safe to say that the world is constantly changing and times are much different than a few years ago.

One artist from the United Kingdom decided to mesh these two times together as he reimagined classic Disney films with some of today’s modern social elements — and the results are incredible!

According to Pupperish, Tom Ward went back in time to apply some of today’s concepts into classic Disney movie scenes and he has a lot to say about the state of our “modernized society”.

Ward recently created a series which he calls, “Alt Disney,” which he draws “modern social issues into the storylines and plots of classic Disney movies using beloved and well-known characters”.

Some of the subjects you will see that Ward incorporated include animal abuse, a society obsessed and disconnected with one another, pollution, and LGBQT. But the results are extremely impactful and are truly amazing. Let’s take a closer look.

This piece of art incorporates water pollution into the Disney animated classic The Little Mermaid.

Being Glued To The Phone

This artwork shows Arthur from the Disney animated film The Sword in the Stone spending too much time on his phone, missing out on his destiny which is right next to him.

Tom Ward shows reversed roles of hunting when Robin Hood holds a bow and arrow up to two guards in this piece of art.

The Power of a SmartPhone

In today’s day in age, it’s safe to say we spend way too much time on our phones. Sometimes even long enough to not connect with other human beings (including our loved ones and soul mates).

What if there was a security camera in the Darlings’ home?

Pinocchio puts his nose to good use when utilizing it as a selfie stick!

You may remember a bit of controversy surrounding Lefou and Gaston in the live-action version of Beauty and the Beast. Artist Tom Ward decided to play on that a bit and draw the two in this piece of Disney art.

You can see the frustration in Jasmine’s face as she cleans the house while Aladdin and Genie sit and play video games — Who can relate?

A lot of females can relate to this one as well — Artist Tom Ward draws up Alice from the Disney classic Alice in Wonderland as she has a bowl of salad and a glass of water rather than the sweet treats featured in the film.

Fun? At the Circus

Simba, Tigger, and Rajah are all seen featured in this circus show.

You can view more of Tom Ward’s artwork by visiting his Instagram page here.

Which one of these art pieces is your favorite? Let us know in the comments.