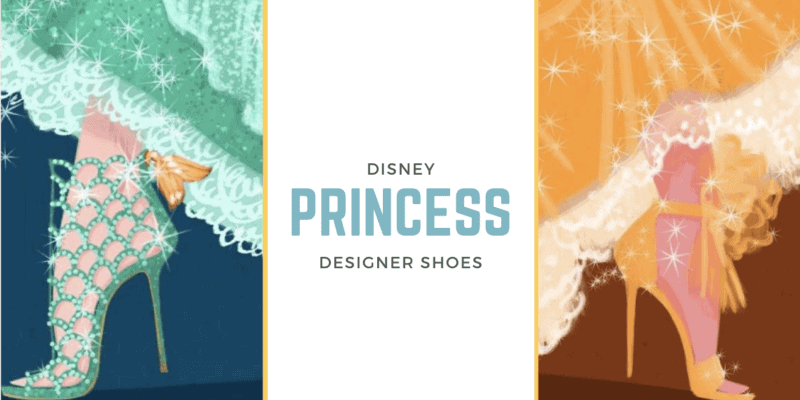 The couple’s side gig is known as “Griz and Norm” and their work is incredible. Many of the talented duo’s illustrations are shared on their Instagram page. Much of their work is inspired by classic Disney films. We’re blown away by how beautiful their character reinventions (and numerous other projects) are.

With nary a glass slipper in sight, let’s dive into Griz and Norm’s Disney Princess designer footwear series.

Elsa was given a stunning pair of white Christian Louboutin heels with sparkling aqua accents. We can just picture our favorite Snow Queen strutting down the staircase in her ice palace wearing these gorgeous shoes!

Anna’s famous snow boots were reimagined as a stunning pair of gold and black Casadei spike heeled boots. While we’re not sure how well the endearingly clumsy Princess of Arendelle could actually walk in these, they’re definitely beautiful.

We love the idea of Merida wearing Alexander McQueen booties. Not only did McQueen share Merida’s Scottish heritage, but his reputation as the enfant terrible of fashion is the perfect match for Merida’s own rebellious nature.

The Lemays’ rendition of Mulan in Manolo Blahnik is incredible. Her red booties have traditional Chinese flair and feature an embroidered Lotus flower. We’re sure Mulan would rock these during an audience with the Emperor after saving China.

Inspired by Belle’s famous yellow ballgown, Griz and Norm illustrated the brunette beauty in a glittering pair of Jimmy Choo Lilyth heels. These striking heels would have been perfect for meeting Beast at the foot of the ballroom staircase!

Ariel was given a breathtaking pair of sea green Sergio Rossi heels. The cutouts look like either mermaid scales or fishnet, making them the perfect choice for the fiery mermaid princess!

Tiana’s green floral Dolce & Gabbana spike heels would have been ideal for her wedding to Prince Naveen. The hard-working Disney Princess deserves to treat herself to footwear like this, especially after saving pennies to open Tiana’s Place!

Rapunzel’s purple Jimmy Choo heels were literally made for her, with a ribbon that looks just like her famous hair. The Lost Princess of Corona would have looked fantastic in these for her official presentation to the people.

Griz and Norm have also created designer shoe illustrations for some non-Princess characters, including Peter Pan’s Wendy Darling and Maleficent. Which pair of Princess shoes is your favorite? Tell us in the comments!