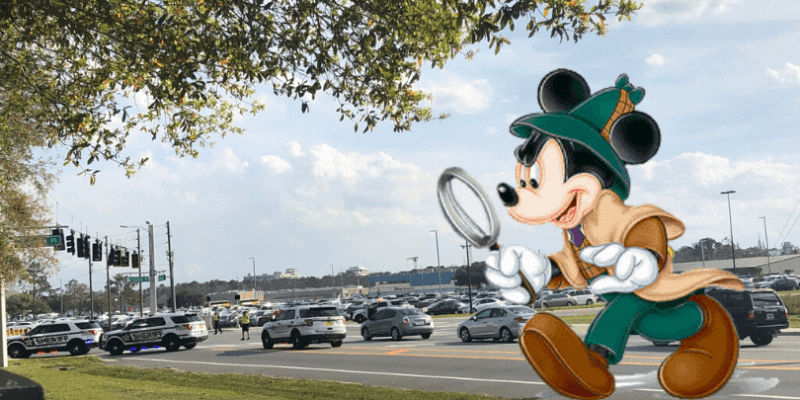 The Orange County Sheriff’s Department disclosed the identity of the suspect arrested during the manhunt which occurred near Disney property yesterday. 18-year-old Andy Mendez. This is not Mendez’s first crime involving a vehicle. According to ABC affiliate WFTV, Mendez was arrested last month after running from a vehicle that went on a wild drive from Kissimme to Winter Garden. Witnesses reported gunshots being fired from the vehicle at that time.

Mendez will have his first court appearance this morning. The manhunt is still underway for his two missing accomplices that managed to get away.

According to WFTV deputies and officers from both Orange County and Oceola County — who took part in a manhunt and recovery of a stolen vehicle near the vicinity of Walt Disney World this afternoon — reported finding the stolen vehicle.

Major Jacob Ruiz of Orange county told the ABC affiliate news station that three people bailed from the stolen vehicle and one person was detained. The car and the suspects were both discovered “in a residential area near Seidel Road and State Road 429 in Orange County.”

The incident was first reported by Disney guests and passersby on Twitter, who shared that there was a traffic jam behind the Magic Kingdom theme park on near Disney World property. Police had reportedly blocked off the intersection at Reams Rd., near the Magic Kingdom Cast Member Parking Lot, and at the time Cast Member transportation had reportedly been interrupted.

The Sheriff’s department revealed to local Florida news source News 13 that a full-on manhunt is underway. Their target is a car thief reported to be armed and dangerous. Cops are reported to have weapons drawn just in case.

The regional news station Spectrum News 13 is covering the search occurring in their backyard and other witnesses are flooding the Twittersphere with their own updates, tagging Spectrum and other news sources to help get the story out. The Sheriff’s department is yet to release and official statement.

We are hearing that the @OrangeCoSheriff's Office is searching for a stolen vehicle in the area. We have Sky 13 ? headed over there and will update this if we get more information. https://t.co/1F4NADRMx5

Related: 4 Vehicles Shot Near Walt Disney World Property and I-4

@WESH not sure what y’all usually do to investigate but there are cops apparently weapons drawn (per our FB page for subdivision) and helicopters all around looking for a supposed armed suspect here on Reams Rd. Staying inside. Trying to search calls online but no confirmations.

Cast Member traffic appeared to be the only major Disney-related disruption, however we are now hearing that it is no longer affected by the police chase.

There's a large law-enforcement presence at Ficquette Road and Summerlake Park Boulevard, near Reams Road. @OsceolaSheriff is in charge of the case: pic.twitter.com/gYE8eleXj4

Law enforcement continues to build near Reams Rd. along Ficquette Rd. and Summerlake Park Blvd. as seen in the video above provided by Spectrum News. The Osceola County Sheriff is now, reportedly in command of the manhunt.

This is a developing story and Inside the Magic will keep you updated as it unfolds.

We hope everyone involved — including Walt Disney World Resort Cast Members, guests, local investigators, and the Orange County Sheriff’s Office — continues to be safe during this time as the incident remains under investigation.