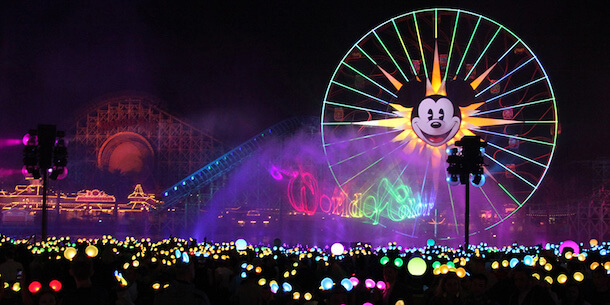 Disney’s California Adventure Park in Anaheim outside of Los Angeles, California, has seen its share of growing pains over the last 19 years. Opening in 2001 with a pop culture lens on California’s offerings, the Park did not go over well. Guests and critics alike roasted the Park for its lackluster comparison to it’s Disneyland Park neighbor.  But with the growth of Pixar Pier, the Little Mermaid: Ariel’s Undersea Adventure dark ride, World of Color nighttime spectacular, the Buena Vista Street makeover and addition of Cars Land, we’re loving what the Park has become. But what’s VP Patrick Finnegan talking about with the possible RETURN of the Hollywood Land Backlot?

Disney California Adventure vice president Patrick Finnegan was interviewed by the OC Register as he looked back over the Park’s history and prophesized about its future. The more than $500,000 refurbishment of Disneyland Resort attractions taking place in 2020 may very well be a part of the changes that Disney’s California Adventure may see, but the real interest was in Patrick Finnegan’s quote to the OC Register, saying, “The studio backlot in Hollywood Land has long been home to Marvel character meet-and-greets. But the superheroes will soon be moving into Avengers Campus. ‘As the Avengers are moving out, we’re certainly looking at, ‘OK, does something need to move in? Does it go back to where it was?’ Finnegan said of the Hollywood Land backlot. ‘It’s very much something that we’re talking about.'”

Disney‘s renovation of the Hollywood Hotel Tower of Terror into the Mission Breakout: Guardians of the Galaxy stands to be the anchor of the new Avengers Campus for all things Marvel. In fact, the Red Car Trolley line leads straight past it, making us wonder if Guests will treat this attraction as the weenie for the new land, or if concept art will confirm something else.

Remember that patent that Disney filed in 2017? It supposed ride cameras could capture the emotions of a Guest and change the ride based on preferences. Combine that with the supposed Black Box Flex Ride (a projection based ride that takes place in a flex space) that swirled in rumors last summer and potentially we could imagine a new attraction. “We’re never done,” Finnegan said. “There’s certainly plans that I’ve seen for the future that are all super exciting.”

While we’d love a new pseudo backlot tour, a Disney animation area or even a dedicated animation building like Disney‘s Hollywood Studios has seen, Disneyland doesn’t generally have that kind of space to share. Disney California Adventure may have some real estate once the Avengers Campus is created and the meet and greets move out. Once the Frozen Live at Hyperion Theatre finishes it’s run, would another show move in, or would that space be used for another new attraction? The family favorite Monsters, Inc. Mike & Sully to the Rescue!  recently was given FastPass return abilities, so this attraction may not go anywhere… so that begs this question:

What attractions would you like to see the return Disney’s California Adventure? Leave us a comment below!