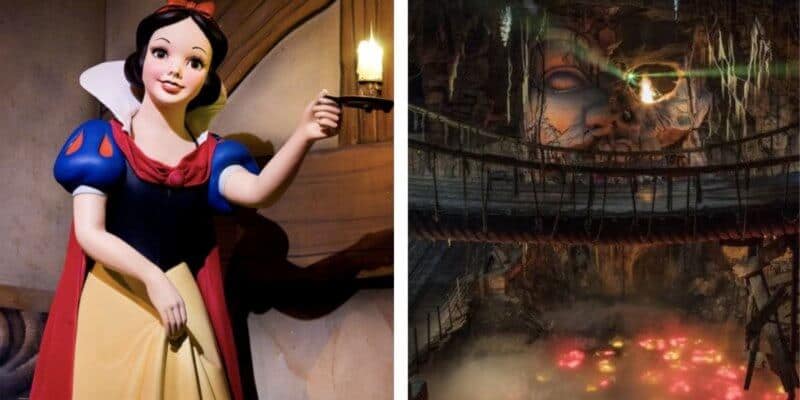 There are several of attractions still open and operating at both Disneyland Resort and Walt Disney World Resort. And not only are they running, they are among some of the most popular attractions across the theme parks.

Snow White’s Scary Adventure could be getting a major update thanks to a recent building permit filed by Disneyland with the city of Anaheim.

The recent building permit is for a $445,000 refurbishment of Snow White’s Scary Adventures, according to city records, and Disneyland officials have confirmed that the opening day attraction is scheduled for refurbishment in 2020.

The permit states that “Disneyland crews will remove and replace show sets, props and scenes, install new structural beams, refurbish rock work and make electrical upgrades on the 6,200-square-foot Snow White dark ride.” Overall, it sounds as if Snow White’s Scary Adventure is getting a little love and some spring cleaning, so hopefully nothing really changes in this classic ride and it is just some basic maintenance that is being done. Although if it’s getting a more major tune-up like Peter Pan’s Flight got a few years back, that sounds pretty magical, too!

What stands out a bit is that the permit also calls for “new projector platforms” which could possibly mean that the classic attraction may see upgraded special effects in select show scenes, which may not be a bad thing!

According to OC Register, this isn’t the only Disneyland attraction undergoing scheduled refurbishment in 2020. Disneyland’s The Indiana Jones Adventure attraction is also expected to undergo major renovations, which is currently located in Adventureland and very popular amongst Disney guests. According to city records, Disney has also filed for a building permit with the city of Anaheim for this popular attraction. Disney has indeed confirmed that the purpose of this is to refurbish this other fan-favorite dark-ride.

It has been rumored that the expected repairs may include replacement of a plank bridge and rock formations.

It seems has if the company is planning on cleaning up some of the older Disneyland attractions that may need some extra love in the coming years. Please keep these refurbishments in mind when planning a trip to Disneyland in 2020.

If you want to visit Disneyland Resort but aren’t sure where to begin planning, then don’t hesitate to reach out to our friends at Academy Travel. Click here for a free, no-obligation vacation quote from the Authorized Disney Vacation Planners at Academy Travel!

Which Disneyland attraction do you think needs a bit of refurbishment? Let us know in the comments.