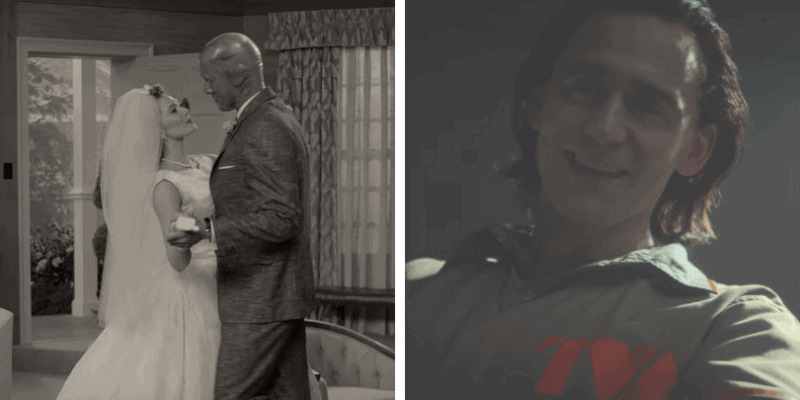 During the fourth quarter of Super Bowl LIV, Disniacs across the nation got their first look at Phase 4 Marvel TV shows coming to Disney+ in one of the best commercials of the night. The three shows advertised were The Falcon and the Winter Soldier, WandaVision, and Loki.

You can watch the full commercial right here:

Okay, let’s break this down by upcoming series:

It begins with Captain America’s shield. We see Sam Wilson, aka Falcon, begin practicing throwing his new weapon. We also see Bucky, aka The Winter Soldier, facing action against Helmut Zemo: the maniacal and manipulative bad guy from Captain America: Civil War. This spells trouble for Bucky. Regardless of how much time has passed since the events of Civil War, we have no idea how much control Bucky has gained over his “triggers.” We also see bucky learning how to handle a flying squirrel suit, suggesting that the Falcon won’t be the only one taking flight in this series.

Then we move to the clips of Wanda and Vision’s life together in WandaVision. This show was advertised as a montage flashing the couple through different eras while sticking to the classic “family sitcom” style. Beginning in the era of I Love Lucy and Honeymooners and flashing to the Brady Bunch 70s era and beyond and back again.

Disney+ does not give us much of anything for Loki. All we see is the logo, and then a slow zoom on his face. He is sitting at what looks like a closed-off interrogation room, wearing something that resembles a prison suit. He simply smiles maliciously and says “I’m going to burn this place to the ground.”

“The Universe is Expanding.”

The spot concluded with the copy: “The Universe is Expanding exclusively on Disney+” Below the Disney+ logo, “Coming Soon” continues to sit in place of any official dates. Still, we can’t be too upset at them for the spot. It was the best Super Bowl ad all night! Anyway, Disney+ is currently available across North America, Australia, and The Netherlands.

What do you think of the commercial? Did you see anything you were expecting? What show are you looking forward to most? Let us know in the comments!