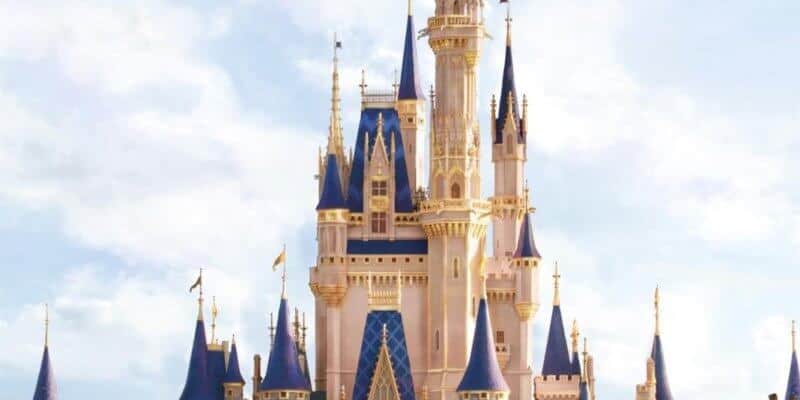 Cinderella Castle at the Magic Kingdom is about to undergo a serious makeover. ABC confirmed once again on Wednesday, February 19, 2020, that the centerpiece for arguably all of Walt Disney World will receive lush gold trimmings and a new paint job. The Castle’s makeover is in no doubt both a celebration of the 70th Anniversary of Cinderella‘s theatrical release and in preparation for Walt Disney World’s 50th Anniversary Celebration.

Announced by Disney this week, Disniacs around the world got to see concept art of what Cinderella Castle will look like after the transformation. The 189-foot-tall icon will be dressed in jaw-dropping amounts of gold detail. However, even more of the color scheme was confirmed yesterday by ABC News (whose parent company is Disney). The gray stones and blue spire roofs will receive a darker, bolder touch-up and the central towers will be dusted in soft rose pink.

Take a look at the difference in the color schemes in the below photos (to the left is the current castle and to the right is the concept art):

Significance of Gold and Rose Additions

While it may look beautiful and romantic on its own, the gold and rose additions on Cinderella Castle carry major Disney significance.

The 50th Anniversary–which Walt Disney World will be celebrating–is officially known as the “Gold Anniversary,” and the soft rose pink will be the same used for Sleeping Beauty’s Castle at the Disneyland Resort in Anaheim, California. A shimmering royal symbol for how far it’s come along with a reflection back to its roots.

The touch of Rose also gives Cinderella’s Castle a greater sense of familiarity with the other Disney Castles in Anaheim, Hong Kong Disneyland, and Disneyland Paris while her twin sister sits in Tokyo Disney and her blue spire tops match those on the Enchanted Storybook Castle in Shanghai Disney Resort.

Cinderella Castle’s Royal Makeover will take play over the next few months. It will not interrupt the Magic Kingdom Castle Shows such as the “Mickey’s Royal Friendship Faire” stage show, the “Once Upon a Time” projection show, and the “Happily Ever After” fireworks show.

If you are looking to plan and book your next adventure to The Most Magical Place on Earth, our friends at Academy Travel are here to help. After years of planning unforgettable Disney vacations, Academy’s agents know just what it takes to work with you and arrange the best possible vacation for your budget. Click here to learn more and receive your free, no-obligation quote today!

Are you excited for Cinderella Castle’s Royal Makeover? Do you think it will look as good as it does in the concept photos? Let us know in the comments!