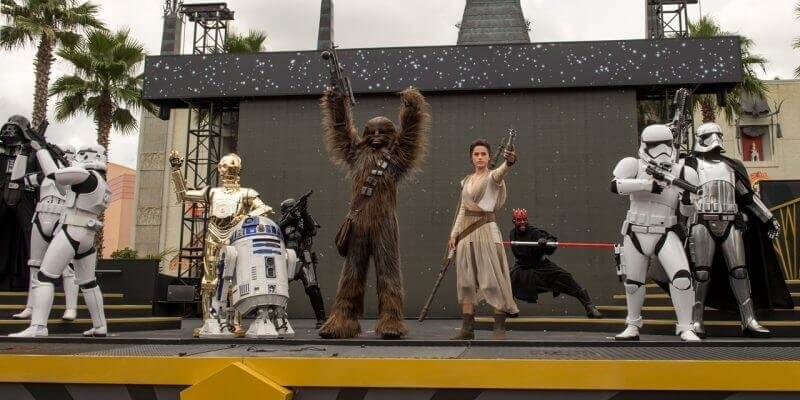 Walt Disney World announced today that the Star Wars-themed stage show, “Star Wars: A Galaxy Far Far Away” will end its run in at Disney’s Hollywood Studios on February 22, 2020.

The news was reported by Spectrum News at mynews13.com, and though we don’t have actual confirmation from Disney, when you visit the Walt Disney World Website, this image appears:

Positioned in the exact spot Sorcerer Mickey’s hat used to stand, right in front of the Chinese Theater, “Star Wars: A Galaxy Far Far Away” delighted guests throughout their day at Disney’s Hollywood Studios. It was a highlight reel of the series combining pre-recorded video with live acting.

The show also featured Star Wars characters such as Kylo Ren, Rey, Chewbacca, R2-D2, BB-8, C3PO, Captain Phasma, First Order Stormtroopers, and–of course–the one and only Darth Vader. Scenes transitioned with words of wisdom from Master Yoda and it concluded on a massive curtain call with every character.

The show began its run back in 2016, a time when Star Wars truly began to take over the Walt Disney World theme park with the show and Star Wars Launch Bay complementing the little corner of the park dominated by Star Tours. Now, thanks mostly to Star Wars: Galaxy‘s Edge, Disney’s Hollywood Studios has almost everything Star Wars fans could want. They now have the chance to ride the Millennium Falcon, undergo their own Jedi Training, enjoy a few drinks in the cantina, and have the chance to create their own chapter of the Star Wars Saga by riding Star Wars: Rise of the Resistance. Next year, fans will even be able to live out their own Star Wars adventure by booking a reservation at the new hotel experience, Star Wars: Galactic Starcruiser.
On top of this, the highly-anticipated ride, Mickey and Minnie’s Runaway Railway will be opening in the Grauman’s Chinese Theater. So, it appears that the obviously-temporary attraction has reached the end of its tenure.

For those who will miss the show, you can feed your nostalgia by watching the video of the 2016 premiere by click on the link below:

Are you planning to visit Disney’s Hollywood Studios to catch the stage show one last time? Our friends at Academy Travel are here to make that happen. Backed with years of experience and award-winning customer service, Academy’s travel agents know what it takes to make your next trip to Disney’s Hollywood Studios or anywhere in Walt Disney World the most magical trip yet! Reach out today for your free, no-obligation quote today!

Are you sad to see “Star Wars: A Galaxy Far Far Away” go away? What was your favorite part of the show? Let us know in the comments!