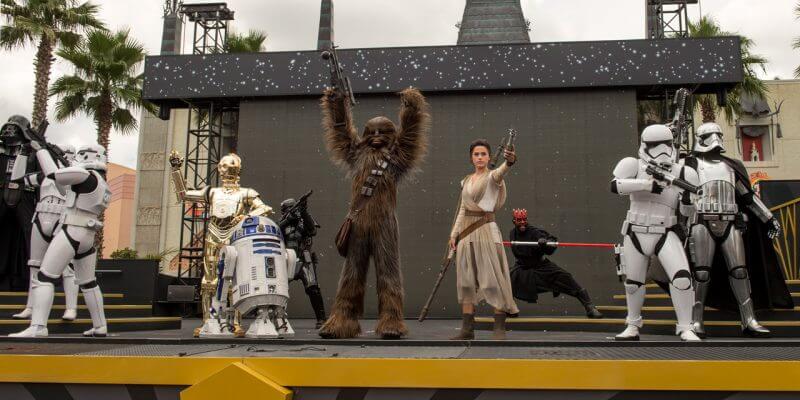 Back in April during Star Wars Celebration 2017 in Orlando– and the Galactic Nights special event that tied in with the convention– the character of Rey (played by Daisy Ridley in 2015’s “Star Wars: The Force Awakens” and the upcoming “Star Wars: The Last Jedi“) made her surprise debut in the “Star Wars: A Galaxy Far, Far Away” live stage show in front of Grauman’s Chinese Theatre at Disney’s Hollywood Studios theme park in Walt Disney World.

And now, two and a half months later (after taking a short hiatus) “A Galaxy Far, Far Away” has returned to Hollywood Studios with Rey as a permanent part of the show’s character lineup. Rey joins characters like Darth Vader, Chewbacca, Darth Maul, Stormtroopers, Captain Phasma, C-3PO, and R2-D2 in a showcase of fan-favorite moments and personalities from the Star Wars universe.

WATCH REY IN “A GALAXY FAR, FAR AWAY”:

Also onstage with Rey is the plucky, round, orange Resistance droid BB-8 and a new sequence incorporating moments from 2016’s hit film “Rogue One: A Star Wars Story.”

Rey will be seen on-screen again when “Star Wars: The Last Jedi” hits theaters this December. “Star Wars: A Galaxy Far, Far Away” is presented several times per day on the Center Stage of Disney’s Hollywood Studios at Walt Disney World.