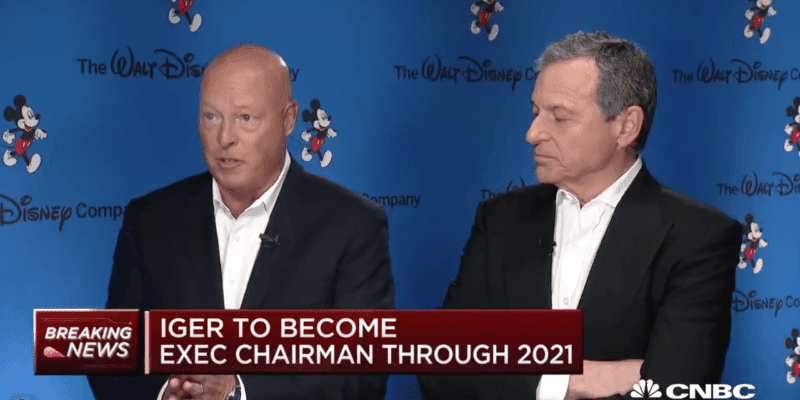 Now-former CEO of the Walt Disney Company, Bob Iger, and his immediate replacement, Bob Chapek, appeared on CNBC to discuss the sudden leadership change at one of the world’s largest media and entertainment businesses.

To every onlooker, the announcement was completely abrupt, but to Disney’s now-current and now-former CEO, this “surprise announcement” was months in the making. And after years of consulting with the Disney board, securing assets from Pixar and Lucasfilm to Marvel and 21st Century Fox, Bob Iger looked at everything and decided that now was the right time to make the move.

“As we looked at the businesses we felt we have a great set of assets we have a great strategy,” Iger explained “‘What’s next?’ And what’s next in terms of my own priorities was making sure that the creative pipeline of the company was really rich and all of our creative engines were working extremely well.”

The former Disney CEO also explained that he wanted to spend his final days as a Disney executive taking a more personal lead overseeing everything coming out of that Disney “creative pipeline,” and he knew in order to do that, he needed more time. He needed to let go of the day-to-day management of the company.

“I wanted to spend more and more of my time on that,” he continued “But the only that I would be able to do that was to give up the day-to-day running of the company to pass the torch on to Bob [Chapek] so that my direct reports and the authority over our businesses will shift to him freeing me up to do what I think is our next big priority.”

Iger Still in Control, Delegating “the Day-to-Day” to Chapek

So, again, while Chapek takes on the role of Chief Executive Officer, Iger is remaining on at the higher level of Executive Chairman until his latest contract ends in 2021. Iger explained that he will still oversee all creative elements at the Walt Disney Company and that Chapek–who will still report to Iger–will simply take the day-to-day responsibilities.

But Iger also explained that he and Disney’s Board of Directors took years to determine if Chapek–the man who oversaw the opening of Shanghai Disney Resort, Star Wars: Galaxy’s Edge at Disneyland and Disney World, and helped spearhead countless other creative endeavors at Disney parks all around the world–at was the right call.

“Well, we’ve had a succession process. It’s been ongoing with the board for a few years. it’s something we talk about virtually at every meeting and we identified bob a while ago as a likely candidate to succeed me but they went through a thorough process. And discussed every possibility. so it was, again, something the board has been engaged with for some time. They got to know Bob [Chapek] very well during that period of time. He ran one of our most complex one of our most important businesses Global Parks and Resorts during a time of great capital investment, during a time of great change and [he] did so very well.

Just before the announcement, Disney stock prices took a hit, dropping to the mid $120s per share. Iger made it a point to mention that the timing was extremely unfortunate but “the timing [of the stock price drop] certainly didn’t play into the timing of this decision.”

Succession Planning: A Period of Transition

By stepping away in this manner to only being Executive Chairman, Bob Iger hopes to create a fluid and successful transitionary period for his successor, Bob Chapek.

“Bob [Chapek] is going to be running the company and day-to-day businesses, Iger explained. “I will be focusing on the creative. But any of the big creative decisions we have to be made, I fully intend to have Bob at my side.

“It’s important for him to learn as much as possible. what this is about, really, is a really good succession process and a really smart transition process. the goal here, during the time that I will be Executive Chairman, is to create a transition process that is smooth and functioning and effective.”

Chapek: “The course that Bob has laid is one that we fully intend to follow.”

Now, Bob Chapek is at the helm and he is set to sail the same course the previous captain charted years ago. At least, until Iger’s retirement in 2021. But he also made it a point to mention he is open to new possibilities and will keep his ear to the ground, ready for what the market place decides to throw at them. Chapek spoke with passion and confidence.

“Well, I obviously have huge shoes to fill. Bob’s legacy in the company is just profound. I think my role is now to take the strategic pillars that he so well established over the last 15 years and continue to work on those and implement those in the marketplace. Most importantly our direct to consumer initiative. but at the same time look around the corner for whatever disruption might be going on in the market place that would necessitate a fresh look at those things. But right now, the course that bob has laid is one that we fully intend to follow and I think it will pay dividends to shareholders for years to come.”

But beyond both Bobs’ confidence in this move, and the transparency that’s gone into this decision. One cannot overlook the close personal relationship these two men have grown working together.

“We’ve worked together extremely well,” Iger said. “Actually, our senior management team worked together quite well. We know each other well. We get together often. We share a number of the issues of our days. [We share] a lot of familiarity and a lot of collegiality.”

Bob Chapek will assume the role as CEO of the Walt Disney Company effective immediately. He is the seventh man to hold the position in Disney history which began almost 100 years ago with Walt Disney himself. Chapek is the third CEO the entertainment company has had in the 21st Century, following Bob Iger and Michael Eisner.
One can only hope we continue to see the amazing achievements being made both at Walt Disney Parks and Walt Disney Studios.

Comments Off on From Iger to Chapek: A “Smooth Transition” for Disney’s Continued Success