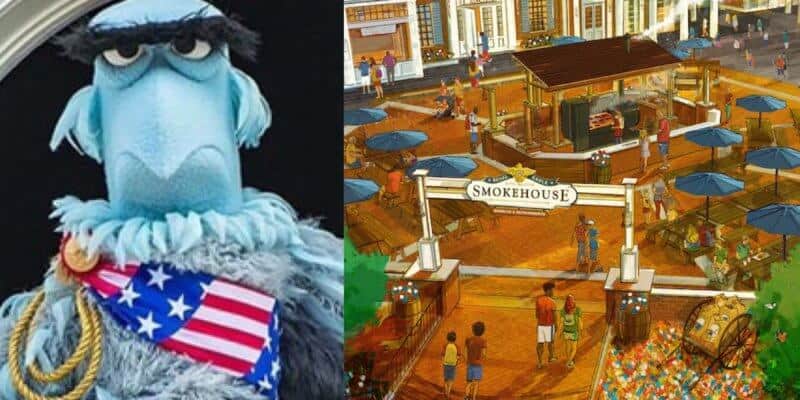 In a patriotic twist, there seems to be a tie in with the most patriotic of all Muppets, Sam Eagle! In a recent press release, it appears this beloved Muppet was the inspiration behind the restaurant name and will play host at this new restaurant.

“Regal Eagle Smokehouse: Craft Drafts & Barbecue, the new fast-casual restaurant opening this winter (2019) will serve American backyard barbecue and home-style craft brews. This restaurant takes its name from Sam Eagle; the beloved Muppet will host a centennial cook-off – a salute to all cook-offs… but mostly barbecue.”

For us Muppet fans that mourned the departure of The Muppets Present Great Moments in American History, the live show at Liberty Square in Magic Kingdom that left the park last October, this might come as a sweet and savory surprise!

The Regal Eagle Smokehouse: Craft Drafts & Barbecue restaurant was slated to open Winter 2019. While a new official opening date has not been announced, it appears construction is moving forward at a quick pace.

Will you be checking out the Regal Eagle Smokehouse: Craft Drafts & Barbecue out when it opens? Let us know about your upcoming plans to visit Epcot! We’re looking forward to the Epcot International Festival of the Arts that’s returning this year, the all-new fireworks spectacular HarmoniouUS coming Spring 2020, and all the other exciting things coming to Epcot soon!