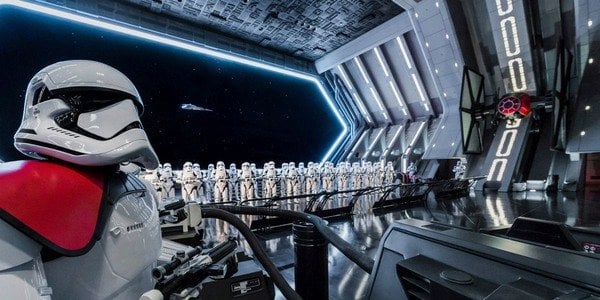 Disneyland’s Star Wars: Rise of the Resistance (ROTR) just opened to the public on January 17, but it is, unfortunately, already experiencing multiple malfunctions and breakdowns.

This isn’t uncommon though as new attractions tend to be overworked and technology, as we all know, has its downfalls.

Even Disney attractions that have been opened for years still have their malfunctions. And because technology isn’t always reliable, it causes Disney guests to miss out on certain experiences. But, as well all know, Disney goes above and beyond to make sure their guests are treated the right way and they leave their vacation on a high note.

One Guest’s Experience Of ROTR Breakdown

This happened just recently at Disneyland Resort as ROTR experienced technical difficulties, causing some guests having to wait in line for hours.

A Disneyland guest told Inside the Magic that he was lucky enough to receive a boarding group for Star Wars: Rise of the Resistance on January 19. Once his boarding group was called, he headed over to the attraction, where he ended up waiting in line for over two and a half hours, a majority of it at a dead stop — not moving up at all.

Though Disneyland guests were stuck on a halted line, Disneyland Cast Members tried to make up for the long wait and started handing out snacks to a majority of people waiting on line.

It’s been a tough day for rise of the resistance Disneyland California #RiseOfTheResistance #disneyland pic.twitter.com/XADKv5ZVQ2

The good news? Disneyland Cast Members handled this situation extremely well and no one seemed overly upset, even after waiting over two hours to not even ride Star Wars: Rise of the Resistance. They issued everyone in line who did not get to experience the ride a return time for when the attraction is back up and running properly.

By the time Disney made everyone get off the line for ROTR, his FastPass had expired. When explaining this to the Cast Member, Disney decided to compensate him for his loss and renewed this guests FastPass for Radiator Springs Racers.

So not only did he get a return time for Star Wars: Rise of the Resistance, he received another replacement FastPass for Radiator Springs Racers, so he didn’t miss either of these experiences.

Disney always seems to go above and beyond for their guests, even when technology isn’t working in their favor. This, among other reasons, is why Disney tends to stand out from the rest.

Have you ever experienced a breakdown during your vacation? How did Disney compensate? Let us know in the comments.