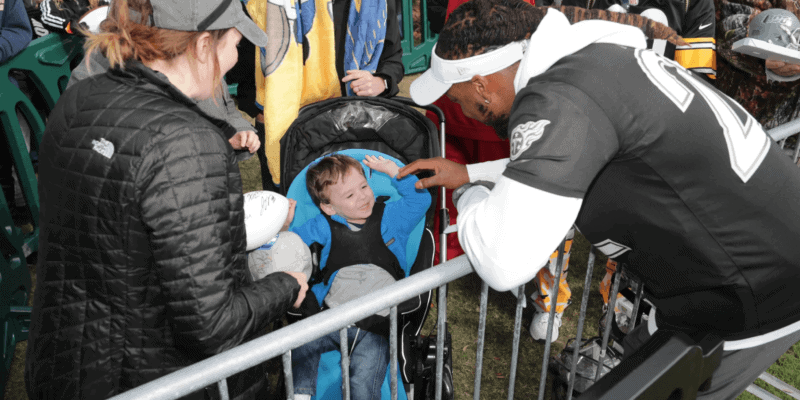 As a fan of both Disney and football, this story warms my heart.

Three-year-old Landon Binkley from Nashville, who was diagnosed with an immune deficiency disorder, and lung disease, was on his Make-A-Wish vacation to Walt Disney World where he thought he would meet Mickey and Minnie. Well, to Landon’s surprise, those weren’t the only celebrities he would be running into.

Landon was in for a very special treat on Wednesday, January 22 at the Pro Bowl practice, which will take place this weekend in Orlando. He met Tennessee Titans running back Derrick Henry!

On our way to Disney World! With a visit to Pro Bowl practice on the agenda first today! #TitanUp @Titans #MakeAWish pic.twitter.com/u5ygavyJFS

But that’s not all because Henry showed a little extra love when he blew him a kiss.

Henry is at the Pro Bowl for the first time after he led the NFL in rushing yards. Because of his successful year, it’s safe to say he was completely mobbed by NFL fans after the AFC team’s first Pro Bowl practice.

As a normal routine, Henry conducted a few interviews, then he made his way to the fence line to sign autographs and take pictures with fans.

@KingHenry_2 My son is a huge Titans fan. We scheduled his Make a Wish Trip to Disney World at the same time as the Pro Bowl. We are so excited to see you at practice tomorrow!!! @Titans #TitanUp @jwyattsports pic.twitter.com/EzNcqSZXQV

Ashley Binkley, Landon’s mother, took to social media about the Make-A-Wish trip, which is where she tagged Henry. When Derrick Henry heard about Landon, who was at the Pro Bowl practice with his mother and grandparents, Henry ran across the practice field to meet him.

Henry took several pictures with the family and signed autographs. Henry even signed Landon’s football and his hat, which also had the signature of former Titans running back Eddie George on it.

“He loved it,” Ashley Binkley said. “He loves Derrick Henry and the Titans. He loves Marcus Mariota, too. He loves getting autographs, getting pictures, and giving high-fives to the players. I think I have him trained to when a player comes around, he gives them the football.”

“We scheduled this Make-A-Wish trip Disney World specifically for the Pro Bowl so we could come and see the Titans,” Ashley Binkley said. “Derrick was so nice to us, to come out of his way to see us. This is really special.”

Ashley Binkley and her family are huge Titans fans as they have been to every Titans game over the last three years. Landon and his mother also regularly attend training camp practices. It is something to keep the family bonding together through some tough times.

Landon Binkley gets treatments every three weeks for his immune deficiency at Vanderbilt Hospital. He also gets treatments daily for his lung disease. Landon was born at 1 pound, 2 ounces.

But Landon is a fighter and his love for football keeps him pushing through. In July 2019, Landon had the opportunity to get his picture taken with Titans controlling owner, Amy Adams Strunk, at a practice. And two years ago, Landon was on the front page of The Tennessean with quarterback Marcus Mariota. He also had his picture taken with Titans head coach, Mike Vrabel, last year as well.

Landon is such a huge Titans fan, he wears Titans leg braces that he picked out himself.