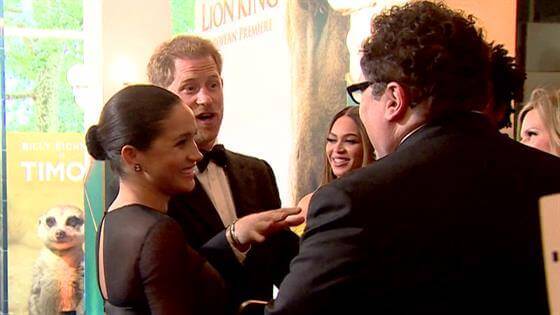 Even more news is unfolding regarding Megan Markle’s deal with Disney. And it looks like she has the most supportive husband ever, because Prince Harry pitched Meghan Markle not just to the Chairman and CEO of The Walt Disney Company Bob Iger, but to Disney director Jon Favreau, too.

A video recently posted to YouTube shows even more of the conversations that the Duke and Duchess of Sussex had with high profile celebrities and Disney executives at the red carpet premiere of The Lion King back in summer 2019. In the video shared by Dailymail, Prince Harry and Meghan Markle are chatting with Jon Favreau and (seemingly half0jokingly) touting Meghan’s acting skills.

Harry then jokes that his wife will do any voiceover, “just not Scar,” referring to the infamous villain from The Lion King.

The look into Harry and Meghan’s conversation with Favreau (as Beyoncé and Jay-Z are right nearby) comes not long after we heard that Harry was pitching Meghan to Iger at the premiere. We reported earlier this month the breaking news that Meghan Markle had signed a voiceover deal with Disney, making real-life royals a part of the Disney family. And then we heard exactly what went down between Prince Harry, Meghan Markle, and Disney CEO Bob Iger at the premiere of The Lion King. You can read all about that conversation and watch the footage here.

No matter how the rest of Harry and Meghan’s conversations went that night, one thing’s for certain: Meghan Markle has signed with Disney. So it looks like we’ll be seeing (or rather, hearing!) a lot more of her in the Disney universe.

What do you think of Prince Harry and Meghan Markle pitching Meghan’s voiceover skills to high-profile figures at The Walt Disney Company? If you were in their shoes, would you have done the same? Or is there a time and place for conversations like this? Let us know in the comments!