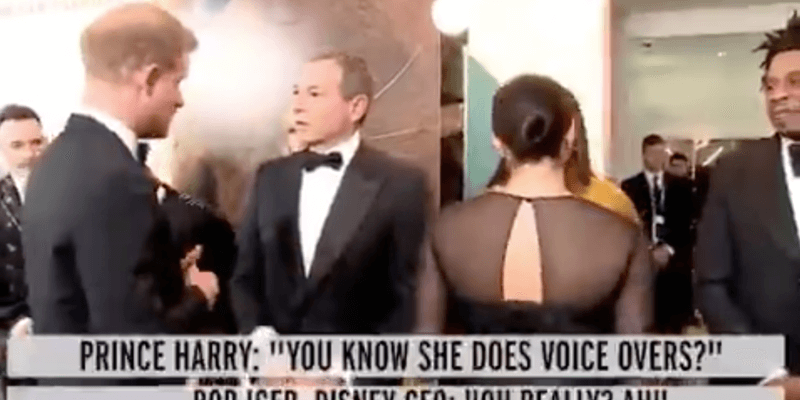 It was the night of The Lion King premiere. Among the pack of celebrities and socialites were, of course, Chairman and CEO of The Walt Disney Company, Bob Iger, and his wife, as well as Prince Harry and Meghan Markle. While Markle was turned away talking to Beyonce and Jay-Z, Prince Harry took the opportunity to queue-in–but really press–Iger about Markle’s desire to do voiceover work as subtly but as direct as he could be.

Here’s how the conversation went down:

Prince Harry: “You know she does voiceovers.”

Sometime between this conversation and the bombshell announcement that Meghan and Harry intend to split with the rest of the U.K.’s Royal Family, Meghan signed a voiceover deal with Disney. The voiceover was also apparently recorded before the Duke and Duchess of Sussex began their Christmas break in Canada.

this is the extended version of that clip (audio boosted) with Harry chatting up Disney CEO Bob Iger for a job for Meghan Markle as the Duchess chats up Beyonce and Jay-Z The event was in London on Sunday July 14, 2019. (that look ? on Susan Iger's face ) #Megxit pic.twitter.com/AzqjwsaoUm

An arrangement that did NOT go unnoticed.

According to the U.K. newspaper The Sunday Times, Meghan’s voiceover work was noticed by the higher-ranking members of the Royal Family.

“However, it also touches on sensitive areas, allowing room for accusations that the couple are cheapening the royal brand and will compromise themselves for money. According to one report, during tense talks before Christmas senior members of the royal family accused the couple of already signing a deal with ‘firms including Disney’.”

It makes sense that the Sussexes got a stern talking to. Voiceovers, acting, these are not things Royals do. Especially without consulting and earning the greenlight from Queen Elizabeth II, and the rest of the Royal Family. And the Windsors are hardly the exception. Even Princess Grace of Monaco, at the end of the day, was not allowed to go back to acting. The video also shows Susan Iger unable to hide her general shock at the fact Prince Harry would have the gall to approach Iger and press him about his wife’s interest in such an informal and, really, inappropriate way.

Now, Iger handles the situation as a veteran of celebrity politics. He retains his poker face and lets the renegade royal give his elevator pitch. We also can’t blame Iger for going along with it because he doesn’t work in the U.K. or the Commonwealth, and the bragging rights for his studio to be the ones debuting a real Royal as a role in a film is insurmountable.

Does this possibly shed light on the couple’s plan to become financially independent? Yes.

But is this move also extremely disrespectful to Prince Harry’s grandmother, and the rest of the family? Also yes.

Meghan’s voiceover announcement is just one of a barrage of moves that the Sussexes recently took to secretly estrange themselves from The Windsors. Harry’s big brother, Prince William, was quoted telling a friend, “I’ve put my arm around my brother all our lives and I can’t do that any more; we’re separate entities.”