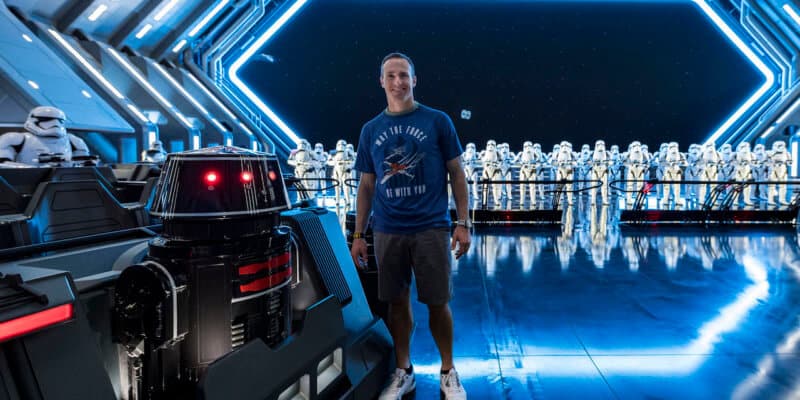 It’s not uncommon for celebrities or sports icons to visit The Most Magical Place on Earth, but this week, in particular, is a bit busier with NFL stars as it’s the week of the Pro Bowl.

The 2020 Pro Bowl takes place today, January 26, at the Camping World Stadium in Orlando, Florida and NFL players from different teams have been there all week for practice.

But while the players aren’t preparing for the 2020 Pro Bowl, they are letting loose and having fun at The Most Magical Place on Earth — Walt Disney World!

Among those NFL stars was the New Orleans Saints star quarterback, Drew Brees, who just went and visited Star Wars: Galaxy’s Edge. He even got the chance to ride Walt Disney World’s latest attraction, Star Wars: Rise of the Resistance, which Brees said was “one of the greatest rides I have ever been on.”

“I really felt like I was on a journey,” he said after he enjoyed the Star Wars attraction with his family.

Drew Brees also made sure to stop by Savi’s Workshop with his loved ones to build their own lightsabers! Afterward, they made their way to Droid Depot and created their own droids to bring back home with them.

Built a droid w my son Bowen !!! He picked out all the parts and put it together. Custom!!! @disney Star Wars

Brees also took to Instagram to show off his little girl having the time of her life at Disney’s Hollywood Studios.

The other day, Brees and his family also stopped by Magic Kingdom to let loose and have some fun.

You can watch the full video of Brees and his family experiencing Star Wars: Rise of the Resistance below.

Have you ever seen a celebrity or sports icon at the Disney parks? Let us know in the comments.

Comments Off on NFL Quarterback Drew Brees Travels To A Galaxy Far, Far Away