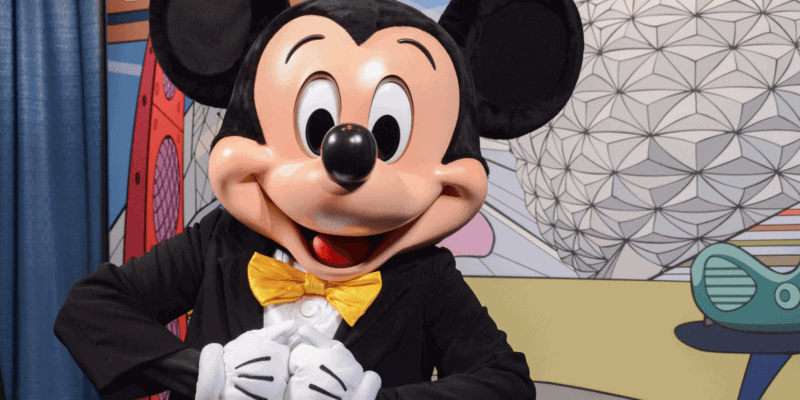 We recently reported that Mouse Gear has officially closed and opened a new, temporary location as Epcot continues its construction for its major overhaul. But it looks like that is not the only location that as closed today.

The Epcot Character Spot located in Innoventions West is now closed to Disney guests, but that doesn’t mean you can’t meet some of your favorite Walt Disney World characters around the park.

According to the new times guide at Epcot, here is a full list of the new character meet and greet spots as construction continues:

If you are looking to meet the main mouse himself, Mickey is now meeting in the Disney & Pixar Short Film Festival in the Imagination! Pavilion.

As you walk up to meet Mickey, you will be surrounded by some of his best moments in film history, including a comic strip filled with scenes from Steamboat Willie and Plane Crazy.

There is a backdrop which closely resembles the sorcerer’s hat, but Mickey is actually meeting guests in his traditional outfit!

She is greeting Disney guests in an adorable photo op themed off of Imagination Land!

Minnie Mouse has actually taken over the World Showcase Gazebo, which is where Daisy Duck previously met.

And since Minnie took over Daisy’s old spot, Daisy is now meeting guests near the new Mouse Gear temporary location, which is in Future World East.

Goofy will be roaming around the Main Entrance of Epcot, right near Spaceship Earth. Be sure to bring your smiles because Goofy is sure to make you laugh!

If you want to meet Mickey’s best friend, Pluto, you can find him around the corner from Goofy at Legacy Plaza West in front of the Epcot mural.

Unfortunately, Baymax and Sadness are currently unavailable for meet-and-greets as Epcot undergoes this major overhaul.

Are you excited to see the changes coming to Epcot? Let us know in the comments.

Comments Off on Epcot Character Spot Officially CLOSED: Where To Meet Disney Characters in Epcot