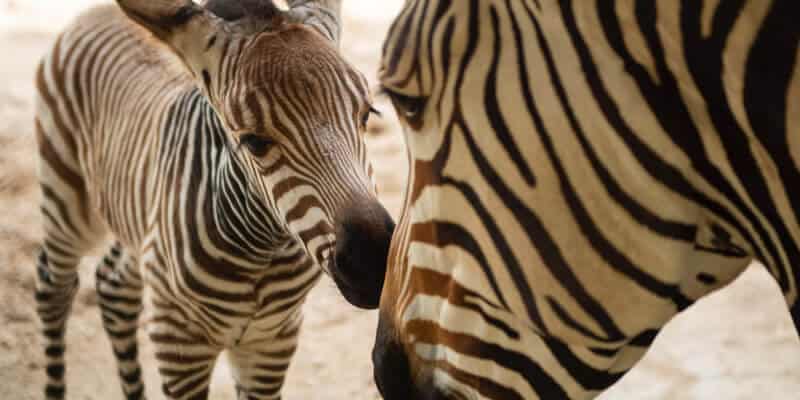 What better day than Wildlife Wednesday to announce the birth of several new animals at Disney’s Animal Kingdom!

Arriving on January 21st, a brand new Hartmann’s zebra was born to a proud mom under the close care of the team at Disney’s Animal Kingdom. Here’s the first picture of the little one below:

This birth needs to be celebrated even more as it is the first time this particular zebra species has been born at the Walt Disney World Resort. Hartmann’s zebra is a vulnerable species so it’s fantastic to see the team at the theme park celebrate this accomplishment.

The baby zebra is still to be named and came in at 65 pounds. The foal was standing and walking around within just 30 minutes of being born!

Moving on to other adorable animals that sit away from Kilimanjaro Safaris, a male Angolan black and white colobus monkey was born on January 15th at the park to mom Zahra.

New baby Douglas was born in the Gorilla Falls Exploration Trail and guests can already see the little one settling in with mom when next out on the trail.

Here’s a picture of the little one with his mom:

It’s wonderful to see baby animals being born at Walt Disney World and to have two in the first month of the year is a great triumph for the team.

Walt Disney himself had a huge passion for animals and it’s great to see the current team continue that passion. Disney has also done fantastic work on raising awareness of endangered species and doing everything they can to help through the Disney Conservation Fund.

If you’re interested in donating or getting involved and are on property you can ask at both the Animal Kingdom Lodge or inside the park. Disney matches every cent given.

If you’re looking to meet these cute new additions to the park, gather up your herd and look into our friends at Academy Travel for a free, no-obligation quote. The team of Authorized Disney Vacation Planners at Academy Travel can help answer all your questions and plan your trip so you can focus on having a magical Disney vacation without any stress. Click here to contact them and begin planning your family’s first Disney vacation!

Let us know if you have any suggestions for the new baby Zebra’s name at Disney’s Animal Kingdom in the comments below.