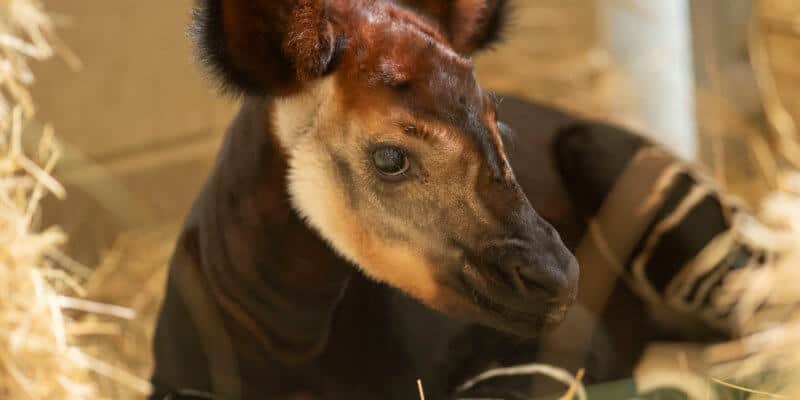 Born on October 1 to parents Zelda and Mandazi and weighing 54 pounds, the calf was walking within one hour of his birth. Currently, the calf is backstage, which is where he will remain for the next several months, after which he will join his parents and the other animals at the savanna at the Animal Kingdom Lodge resort. Animal keepers at Disney’s Animal Kingdom Lodge will continue to monitor the okapi calf, ensuring he bonds with his mother and is maturing properly.

The closest relative to the giraffe, the okapi is an endangered species native to rainforests of the Democratic Republic of the Congo in Africa. Because of this, the Walt Disney Company has been at the forefront of okapi conservation for many years through the Disney Conservation Fund. Disney also has a longstanding partnership with the Okapi Conservation Project, which created World Okapi Day to generate awareness for this rare and endangered mammal.

This okapi calf is one of the many animals born at Walt Disney World each year. The okapi, as well as other animals at Disney’s Animal Kingdom and Animal Kingdom Lodge, was bred through a Species Survival Plan, a program overseen by the Association of Zoos and Aquariums that ensures responsible breeding of threatened and endangered species, like the okapi. Several cast members at Walt Disney World work as Species Survival Plan coordinators to help continue successful and safe breeding of the many endangered species at Disney’s Animal Kingdom.

While this okapi calf may not be ready to emerge onto the savannas quite yet, be sure to visit Disney’s Animal Kingdom Lodge to take a look at the multitude of animal species that currently reside there. You never know what new discoveries you may find at Walt Disney World resort.