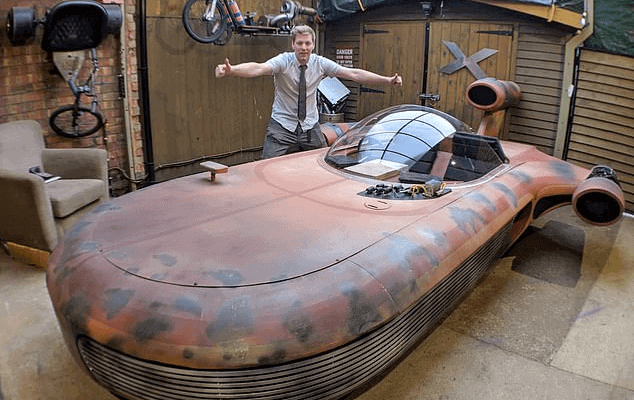 So you think you’re a Star Wars fan?

Colin Furze is a huge fan, and he has the Landspeeder to prove it. The eager and determined 40-year-old YouTuber from Lincolnshire, England, spent over five weeks putting painstakingly detailed effort and hard work into building a life-size Star Wars Landspeeder like the one Luke Skywalker uses in Star Wars Episode IV: A New Hope.

Furze doubles as an inventor and says that he began building his landspeeder by stripping down a golf cart. His landspeeder replica measures just over 11 feet in length, weighs almost 950 pounds  and can reach speeds of up to 25 miles per hour using wheel power and 40 miles per hour with its jets working. The vehicle is made of parts from the golf cart, wood and sheet metal to re-envisage the aircraft that was made famous by the 1977 film by George Lucas. At this time, t is believed to be the only full-scale model metal Landspeeder in existence.

The Star Wars Landspeeder isn’t Furze’s first invention–or the first vehicle he has built. He is famous for his inventions, such as the world’s fastest mobility scooter and even a drivable hot tub car. So Star Wars vehicles probably seemed the next reasonable things to build.

Colin Furze has created a replica for each of the Star Wars trilogy releases. He has already built a Tie Silencer and a giant AT-AT. Furze says he built this Landspeeder ahead of the release of the upcoming Star Wars: Episode IX: The Rise of Skywalker.

The famous Furze released a new YouTube video yesterday about the construction of his Star Wars Landspeeder. You can see that video here:

Are you a bigger Star Wars fanatic than YouTuber/inventor Colin Furze? Tell us why in the comments section below this post.

Comments Off on YouTuber builds Star Wars Landspeeder in his own garage!