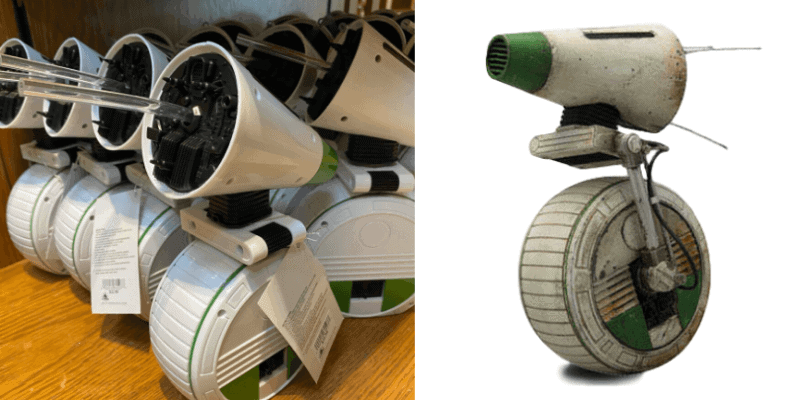 Like most members of the Disney fandom and frequenters of the Disney Parks, we love souvenir sippers! From Oogie Boogie sippers to Jack Skellington sippers, we can’t get enough. There are even Frozen 2 souvenir sippers to celebrate the new Disney sequel! But the latest sipper that has caught our eye is themed after the adorable new droid from Star Wars: The Rise of Skywalker — D-O!

The D-O souvenir sipper might not be as big as the droid is in real life, but it’s definitely just as cute! It retails for $22.99 and can be found at select merchandise locations throughout Disneyland Resort and Walt Disney World Resort. Specifically, we found the little guy in a display of Star Wars: The Rise of Skywalker goodies at Julius Katz & Sons, one of the shops on Buena Vista Street in Disney California Adventure.

There’s no denying that D-O is absolutely adorable. We don’t know that much about D-O, but here’s the cute new droid’s description according to the Star Wars fandom wiki:

D-O was a droid created by Babu Frik out of spare parts. An excitable little droid, D-O befriended the Resistance droid BB-8 some time after the Battle of Crait, and wanted to be just like his droid friend.

Star Wars: The Rise of Skywalker writer Chris Terrio even mentioned during the film’s global press day that he thought of the relationship between his two pet dogs when he was coming up with the dynamic he wanted to create between BB-8 and D-O. It looks like D-O will be kind of like a little brother to BB-8, and we can’t wait to see that on the big screen!

Watch the full press conference below, for more insight into Star Wars: The Rise of Skywalker from the writers and actors.

Star Wars: The Rise of Skywalker debuts in theaters on December 20. But you can start celebrating the release of the film at the Disney Parks all season long! Reach out to the Authorized Disney Vacation Planners at Academy Travel to start planning the  Star Wars-inspired Disney trip of your dreams and travel to a galaxy far, far away at Star Wars: Galaxy’s Edge in Disneyland or Walt Disney World. Click here for a free, no-obligation vacation quote from Academy Travel.

Do you plan to pick up this D-O droid souvenir sipper on your next trip to the Disney Parks? Do you own any souvenir sippers from Disneyland or Walt Disney World? Let us know in the comments!