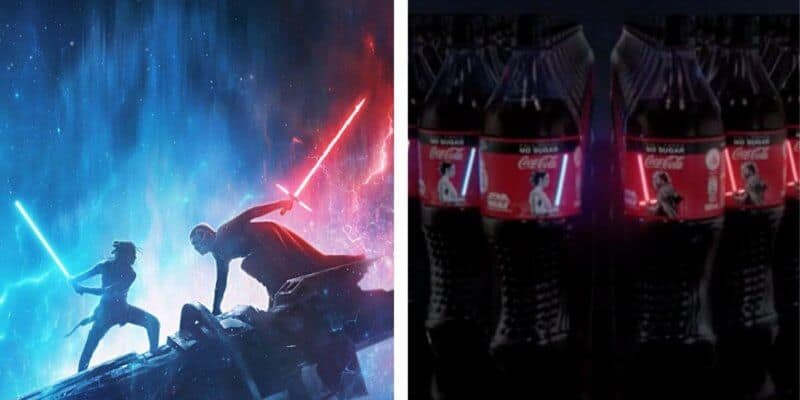 Attention Star Wars fans! Star Wars: The Rise of Skywalker is hitting theaters later this month and the merchandise has been pouring in.

From apparel to accessories, Disney has been releasing merchandise around the globe in anticipation to the upcoming film.

But now, Coca-Cola is getting in on the trend as they have just announced the release of limited edition bottles. For the No Sugar Coca-Cola line, the new limited-edition bottles will, of course, be themed off of Star Wars and will feature something very unique.

Lightsabers! But not just any old lightsaber — These lightsabers will actually light up! Get ready, Star Wars fans because you will be able to have your very own ‘battles’ with these Coca-Cola bottles before the new movie is even released.

Keep your eyes on these Limited Edition Lighted Star Wars: The Rise Of Skywalker Coca-Cola No Sugar Bottles! In anticipation of the upcoming movie, we will be releasing 5 clues to 5 locations per day on our FB, IG, and website on where to get your hands on one over the next 3 weekends (Fri – Sun) from 6 to 22 Dec. Let the #GalacticHunt begin! >> Link in bio Catch Star Wars: #TheRiseofSkywalker in cinemas this 19 December. #StarWarsSG *T&C applies

But that’s not all because Star Wars fans in Singapore can also go on a special “treasure hunt”. Coca-Cola shared that there will be some special treats across 45 hidden locations in which you can narrow down after solving a riddle on Facebook and Instagram. Fans who solve the riddle will receive a coupon which can be redeemed at a secret location.

In addition, Coca-Cola shared that there are two collectible bottles. One will feature Kylo Ren and a red lightsaber and the other will show Rey with a blue one.

Rey’s journey continues and the Skywalker saga concludes in the upcoming film, Star Wars: The Rise of Skywalker, which hits theaters in the United States on December 20, 2020.

Don’t you wish these limited edition Star Wars: The Rise of Skywalker themed Coca-Cola bottles would come to the United States? Let us know in the comments.