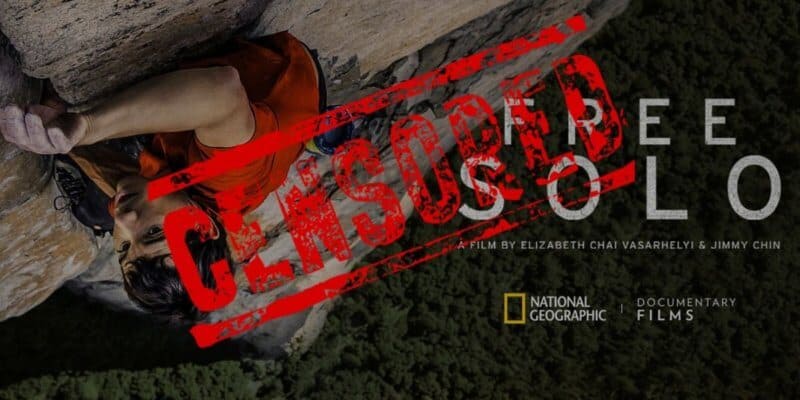 One of the things viewers were looking forward to is the library of documentaries available on Disney+, especially from National Geographic.

Apollo: Missions to Mars, The World According to Jeff Goldblum, Earth Live, and Stonehedge Decoded: Secrets Revealed are amongst the various National Geographic documentaries currently available, but there is one in particular that has gotten a bit more buzz than the rest.

Free Solo, the award-winning documentary, is getting a bit more exposure than ever before, but unfortunately it seems as if the version on Disney+ is being censored for other audiences.

The National Geographic documentary first appeared on Hulu and follows the story of Alex Honnold, a climber who attempts to do a free climb of El Capitan in Yosemite National Park. When Free Solo appeared on Hulu, it was uncensored and featured adult language as the climber attempted to make his trek up El Capitan.

It really shouldn’t come as a major shock that Disney+ is censoring Free Solo as the use of the F-word is pretty frequent and Disney’s new streaming service is meant to be a family friendly service.

According to a report from ScreenRant, the Disney+ edit of the film cuts out uses of the F-word in multiple instances, including the part where he Honnold says “this is f—ked” and actually ended up replacing it with a recording in which he says “this is messed up.”

According to the ScreenRant report, Disney+ also cuts out a line of dialogue where Honnold uses the phrase “goddamn.”

Free Solo is a critically acclaimed piece as well as an award winning film. It was recently named the Best Documentary Film at the Academy Awards earlier this year.

You can stream the censored version of Free Solo on Disney+, available now.

Are you surprised to see Free Solo censored by Disney+? Let us know in the comments.