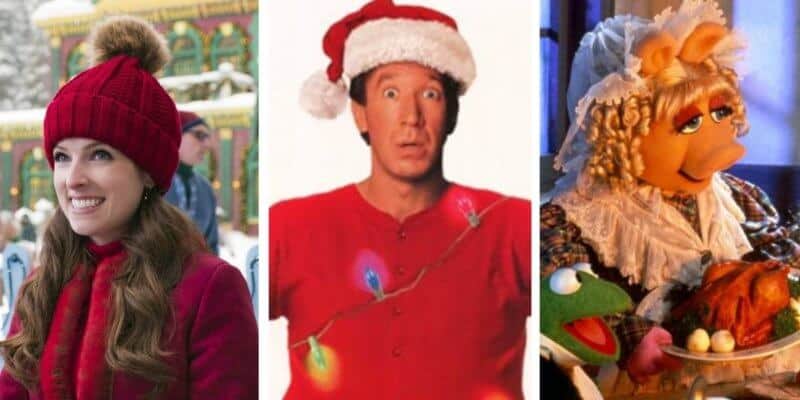 Disney’s new streaming service, Disney+, has officially made its debut in the United States on November 12 and it has been everything we could’ve imaged (and more!)

The Disney+ library is filled with a ton of content from Disney+ Original Series to Classic Disney Animated Films to Disney Channel Original series and films to Marvel and Star Wars content, too! But that’s not all Disney+ has to offer.

Disney’s new streaming service made its launch right before the holiday season and they made sure to include amazing (and classic) Christmas movies so you and your family can get into the holiday spirit.

Let’s take a look at the best Christmas movies now streaming on Disney+:

Starring Tim Allen, Wendy Crewson, Judge Reinhold, Eric Lloyd, Larry Brandenburg, and David Krumholtz, this Christmas movie brings joy to families everywhere year after year.
Scott Calvin, a divorced dad who currently has custody of his son, Charlie, on Christmas Eve, accidentally kills a man who was on his roof (and also wearing a Santa suit). Scott and Charlie are then magically transported to the North Pole, where one of Santa’s elves informs Scott that he must take Santa’s place before the next Christmas arrives.
Needless to say, Scott thinks he is dreaming all of this up, but over time, he starts to gain some of the most iconic Santa traits. So, maybe that night at the North Pole wasn’t a dream and maybe, just maybe, Scott has a lot of work to do before the next Christmas.

This Christmas sequel follows the story of Tim Allen’s Scott Calvin as he is now taking on his role as Santa Claus. He is finally accepting who he is before he realizes, in order to remain Santa Claus, he must find a Mrs. Claus.

We also follow Charlie as he is now a bit older and unfortunately, becomes a troublemaker, as he struggles with the fact and the reality that his father is Santa.

Who doesn’t love a classic? The Oscar-winning film follows the story of an old man, who goes by the name of Kris Kringle, and fills in for an intoxicated Santa in Macy’s annual Thanksgiving Day parade.
Kringle becomes a hit and soon starts to surprise customers and employees by claiming that he is the real Santa Claus, which soon leads to a court case to determine his mental health and his authenticity.

Tim Burton’s The Nightmare Before Christmas

This Disney movie can be enjoyed throughout the entire fall and winter months as it gives off both a Halloween and Christmas feel.
Follow the journey of Jack Skellington, Halloweentown’s pumpkin king, who has recently become bored with the annual routine of scaring people. Jack soon accidentally ends up in Christmastown, which features bright, beautiful colors and holly jolly spirits. Jack decides he wants to take over Christmas by kidnapping Santa Claus so he can then take over his role.

One of the most beloved Christmas movies is The Muppet Christmas Carol. This film is an adaptation of the classic Charles Dickens tale A Christmas Carol comes courtesy of The Muppets, including Kermit, Gonzo, Miss Piggy and others.

I’ll Be Home for Christmas

Calling all 90s babies — This one’s for you.
Jonathan Taylor Thomas plays the role of a spoiled college student who refuses to go home for Christmas until his father bribes him and then offers his vintage Porche — but only if he can make it home by 6pm on Christmas Eve.

Anna Kendrick plays the daughter of Kris Kringle who is full of Christmas spirit in this Disney+ Original film. But it isn’t always holiday fun as she soon wishes that she could do something “important” like her brother Nick, who was told would take over from their father this Christmas.

Mickey’s Once Upon A Christmas

You and your family can join Mickey and the rest of the gang for a series of hilarious and heartwarming shorts and stories in Mickey’s Once Upon A Christmas. This is a must watch in my household every year!

These are only a select few of the many Christmas movies now available on Disney+. Be sure to grab your family and some cozy blankets so you can cuddle up and spread the holiday cheer this season.

What is your favorite Christmas movie on Disney+? Let us know in the comments.

Comments Off on Tis the Season: The best Christmas movies streaming now on Disney Plus