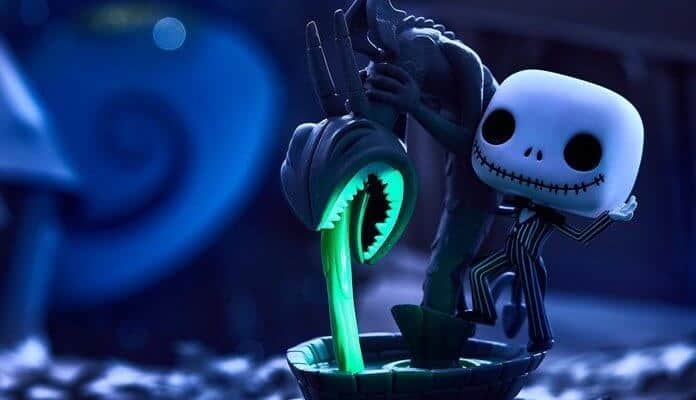 Funko Pop! wanted to re-capture one of the iconic scenes of the infamous pumpkin king from his beloved “The Nightmare Before Christmas” film and the result is the most sinister and adorable Pop! figure to ever exist.

This all-new Movie Moment Funko Pop! shows Jack Skellington in the infamous fountain from the Halloween Town Centre. For fans of the film, you may remember this area as a gathering site for the citizens of Halloween Town. Here is where they would come to see presentations lead by Jack and the major.

The pop stands at 6 1/2″ tall, glows in the dark and is a BoxLunch exclusive! BoxLunch is currently running a 20% off discount on their entire site. For that reason, this special pop has been marked down from $32.90 to $26.32.

Get your own version of this movie moment Pop! here.

If this Jack Skellington Pop! figure isn’t enough Funko for you, the company also just recently released its other The Nightmare Before Christmas Diamond Collection Pop!, which is exclusive to Hot Topic. The Pop! figure features the infamous character in dapper clothes of a suit and top hat with glittery accents. The figure stands at 3 3/4″ tall and is available today for $14.50.

This figure is so stylish and shiny; it’ll make you forget all about the idea of a sequel to the original “The Nightmare Before Christmas.” As we shared last month, Disney is said to be in talks to create a live-action/follow-up to the beloved film. However, at this time it’s not known what Disney really has in-store for the film and the famous character.

Get your own version of this Jack Skellington Funko Pop! here.

Will you be purchasing one of these Jack Skellington Pops? Let us know in the comments below!